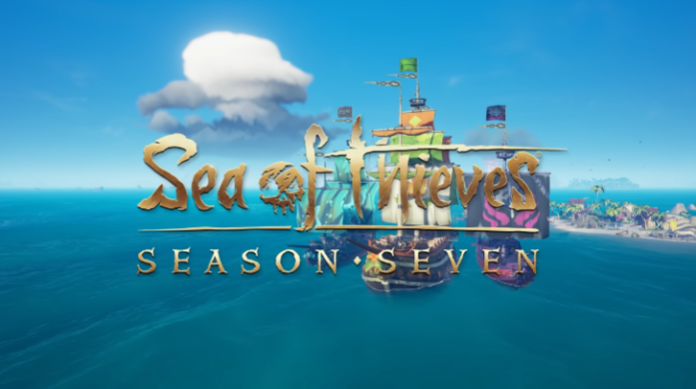 The first launch of Sea of Thieves was not very successful, so the developers focused on upgrading. The game immediately underwent a redemption arc, with new material being released on a regular basis, considerably increasing user experience. This enhanced version was released on August 4, 2022. The following are the specifics of the Sea of Thieves Season 7 new features.

Contents
1) Completely personalize your ship!
1.1) Buy the ship and Become its Captain
1.2) Name it Anything
1.3) Customize its Interior and Exterior
1.4) Pack up Items to Set Sail
2) Shipwright Services are Now Available
3) Addition of Sovereigns
4) Record every Journey
5) Milestones and Rewards!

Buy the ship and Become its Captain

The ships can now be purchased from the main menu. Their pricing would differ and they each have a restricted capacity with some features restricted to each. These are the prices connected with each ship:

With this Captaincy, you can now have access to Captain’s Voyages. Captain’s Voyages are smaller versions of standard Trading Company Voyages that are offered solely to Captains and their crews. They may be acquired at the Shipwright Shop at any Outpost. It would allow players to select from a range of mission kinds as well as a mix of shorter and longer Voyages.

You can literally choose any name for your ship as it’s yours! There are some requirements mentioned at the bottom of the screen you can see to construct your name. The name would be inscribed at the top of the quarters, making it in sight of everyone.

Customize its Interior and Exterior

In-game, the captain’s quarters are now entirely customizable, joining the ship’s exterior as a blank canvas for the player’s imagination. The outside may be completely customized with the patterns and motifs of your choice.

Captains may now save ship loadouts and decorate the Captain’s Cabin with trinkets, decorations, and other items keeping the interior interesting too.

Changing the inside of your ship necessitates a trip to the Shipwright Shop, which is located on the docks directly next to your ship when you spawn. After that, go ahead and choose Ship Decorations from the Ship Customization Chest.

Pack up Items to Set Sail

With space in your ship, you can pack up accordingly. The captaincy grants you access to choosing everything from cannon to food. The items can be purchased from multiple spots.

This is how each basic item costs:

The Shipwrights now have a lot more authority. Players in Sea of Thieves may now buy planks, cannon balls, fruits, and other goods from shipwrights at any station in exchange for money. Along with selling supplies, repairing ship damage, and providing Captains with unique Captain’s Voyages.

These aristocratic types, newly founded in the Outposts, operate as brokers between Captains and Trading Companies. Sovereigns are NPCs that will collect treasure from Captains and their crew and distribute it across Outpost Trading Companies on your behalf as a faster way to trade treasure for the same return. Just don’t expect to keep their attention if you aren’t a Captain yet.

Every Captained ship has a Captain’s Logbook on the Voyage Table. It keeps track of the ship’s name, crew, and a variety of ship and Captain information including gold earned and days on the water. These are kept throughout the full history of the ship, the Captain, and the current play session.

The only thing you need to be careful about is to keep it secure. Anyone can get to it and you have to keep it away from your opponents. If they know your plans, they can use the record to their advantage.

With the addition of the Milestone system in season seven, players will get access to even more personalization possibilities. Milestones monitor your progress and achievements throughout your account history, rewarding you for reaching certain objectives. This is a complete record of the player’s achievements in the Ship’s Log that is classified into numerous categories.

Season 7 of Sea of Thieves will have over 100 levels to unlock, as well as a wealth of goodies for players to obtain. Players may now get a lot new to explore so set sail as soon as you can!