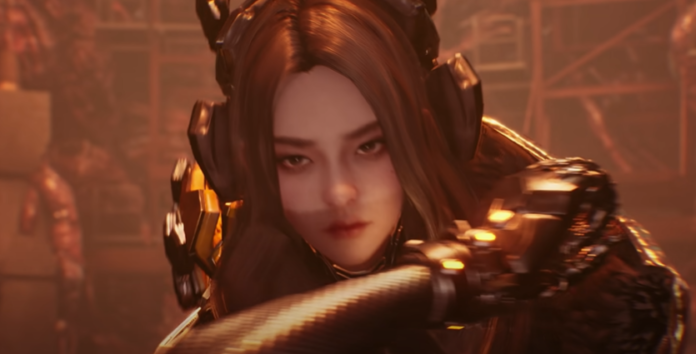 Project Eve is an upcoming sci-fi hack and slash game that is currently being developed by a Korean studio Shift Up. As seen from its recent reveal trailer, the title seems to get much inspiration from the likes of Bayonetta, Devil May Cry, and Nier franchise.

In our Paused series, we analyze the paused moments of a trailer and talk about what’s going on in them. Previously, we covered the Matrix 4 teaser trailer, now it’s time for Project Eve trailer breakdown.

Project Eve’s reveal trailer starts with the main character, Eve, fighting an alien-like creature. We get to see her action moves and her acrobat skills through which cut off the metallic arm of the enemy and eventually finish it off.

A couple of shots after, we see that Eve is thrown into space by a creature having a large arm. In space, the main character is seen floating next to a giant many-eyed creature that resembles a creature from Bayonetta.

Next up, the trailer showcases the possible open-world aspect of the game. While it is unknown at the moment that the game will be open-world or not, it can be observed from the images that the game wouldn’t be linear like Devil May Cry or Bayonetta franchise. Instead, here it takes its inspiration from Nier series as Project Eve features multiple areas in the trailer that players would be able to explore.

The remaining section of the Project Eve trailer majorly focuses on various enemy types and boss battles. Again, the enemies look like aliens having multiple faces, tentacles, and some having chainsaws on their heads. Some foes are also showing firing bullets at Eve. As for our agile Asian lead character, she rocks a sword that charges with lightning. Eve combat also includes special cutscene moves and QTE (Quick Time Event).

Lastly, we are introduced to a human-sized opponent who is called Alpha NA:tive and somewhat resembles Eve – that makes us believe she is also some sort of cyborg.

That’s all regarding the Project Eve trailer breakdown for now. The release date and other details are not disclosed yet. We will let you know when that information is released. For more such analysis, keep following our Paused series.