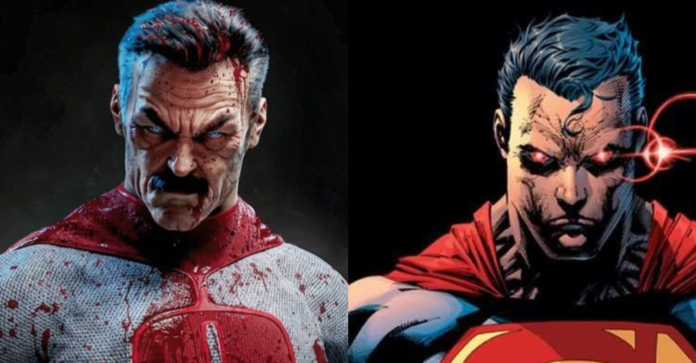 After an incredible season of Invincible on Amazon Prime, comparing different characters is a favorite pastime of superhero enthusiasts. With so many possible matchups and combinations, it’s really difficult not to. One such matchup brings us to Omni Man vs Superman (yes you read that right).

Battles between the giants are always exciting but today we bring you something that is completely out of this world. After many superhero combinations, fans have finally raised a question on Omni Man vs Superman, who would win?

Without a doubt, the father of Invincible, Omni-Man is a brutal warrior who wears more blood than armor. But on the other hand, Superman is someone who was gifted with flying powers and superhuman strengths and he has since evolved into an archetype that has dominated comic books for decades.

Superman is the strongest being ever and he has very few worthy rivals. But does that mean that he can dominate someone who is 2000 years older than him? Let’s analyze both of these characters, their strengths and weaknesses, and who would win if they come face to face.

At the beginning of Invincible, Omni-Man is a ruthless conqueror with little sympathy for helpless humans, mercilessly murdering thousands just to prove a point to his son.

Just like Superman, Omni-Man has superhuman stamina and can move and fly at incredible speeds. The reason Omni-Man can fly on Earth is that Viltrumies have a sophisticated balancing system on their ears.

Moreover, People from his planet produce fewer tiredness hormones than humans do, which allows them to fight for longer periods of time without being exhausted. Since Omni has a power rating of Class 100+, or above 100 ton he is able to lift things that weigh way more than he does.

Another crucial strength that Omni-Man has is that he can even perform interstellar travel, which means he can fly in space without a suit. Other noteworthy strengths include larger lung capacity, immunity to injury, faster healing, slower aging, and dominant genetics.

After discussing the strengths of Omni-Man, now what exactly are the traits of Omni-Man that are the most vulnerable and can be counted as a weakness?

The foremost weakness that Omni Man has is his ears, Omni Man can experience extreme pain and even die whenever his ear’s equilibrium is upset. They usually get upset with frequency and the higher the frequency more pain he has to deal with.

In addition to these powers, Superman also possesses superhuman strength, hearing, breath, and healing. Superman gets most of his strengths from the sun, for instance, he can absorb radiations, giving him abilities like super-vision or even super-hearing.

Talking about Superman’s weakness, Kryptonite is something that he is quite vulnerable to. It is a radioactive piece of the planet Krypton that came to Earth with Superman and he can only protect himself from its rays by using a lead.

Now here comes the part of the analysis that we all have been waiting for, now we will consider the strengths and weaknesses of both the characters and come to a conclusion once and for all. We have seen that these two formidable forces are essentially the same in their basic skill set.

They are both aliens and are regarded as some of the best representatives of their respective races, however, superman does have a few more abilities than the Omni Man but his Kryptonite weakness is something that definitely needs to be considered.

This could be a plus point for Omni Man but a big question arises how exactly will Omni Man get access to Kryptonite? With Superman having no weakness to give a benefit to Omni Man, Omni Man definitely won’t stand a chance in front of Superman.

Obviously, Superman will have to go beyond his usual moral limitations to do so as it won’t be an easy victory. But in the end, Superman who is possibly the most powerful superhero ever made will likely win the fight against Omni Man.

That is all on Omni Man vs Superman. For more character comparisons, and content on TV Shows, Movies and Games, stay tuned with Retrology.