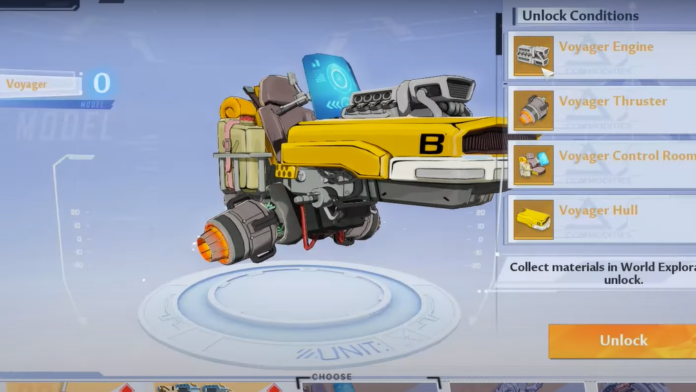 Tower of Fantasy is an open-world MMORPG developed by Hotta Studio and published by Level Infinite. After a long wait, the game was globally released on Android, iOS, and Windows. Here we will guide you on how to unlock the Tower of Fantasy Voyager Mount.

The game has been noted to share quite a lot of similarities with Genshin Impact, such as their anime-like characters and Gacha. However, one thing surely unique to Tower of Fantasy is its different types of modes of transportation. While Genshin has Waveriders players can use to zoom across the sea in some areas, Tower of Fantasy is full of different mounts and jets. Genshin has made different platforms and balloons which move, but none of those are controllable.

One of the mounts in Tower of Fantasy is Voyager Mount. Like all other mounts, to be able to obtain it players must have completed chapter 1. The catch with this mount is that you don’t simply get it as a reward for completing a quest. To unlock it, players must first collect some materials and use them to build it.

Thruster: This material is a rare drop you can get after you defeat all of the Four Powers northwest of Navia. This may take a long time to obtain as the drop rate for this item is very low.

Engine: For this material, players have to first complete the hidden quest “Hyena’s Banges base” in the Raincaller Island Oil Rig. Once they are done with this quest, they will find a Hyena scout at the highest point of the base.

But to enter the base they will have to answer to a guard standing at the front. The guard will ask a few questions for which the players just have to answer the reply on the bottom to be able to enter the base. They can then climb up to find the Hyena scout who will be guarding the engine behind him. You can exchange the engine with the scout with one Sizzling Meat.

Hull: This can be found close by the SSR Colossus Arm Relic location in Cetus Island.

Pilot Seat: Head over to Seaforth Dock and look for a locked bunker near the Crescent Shores. Next, you’ll have to unlock the bunker with the following passcode: “3594”. The pilot seat can be found inside this bunker.

Once you have obtained all the materials, check your Vehicles tab. You’ll then have unlocked the Voyager mount. As you increase its maintenance level, you will be able to change the way it looks as well.