Nezuko demon form getting criticized for being sexualized 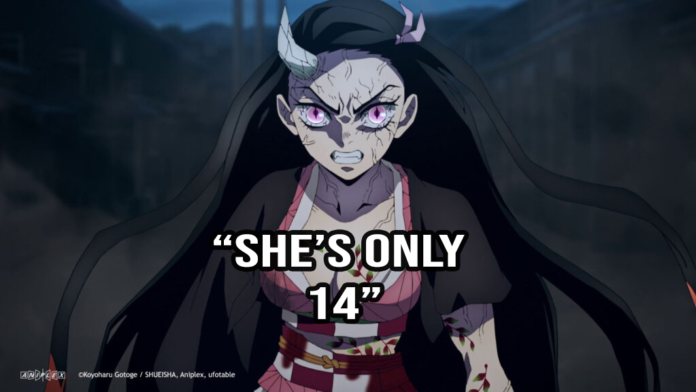 Demon Slayer Entertainment District arc is going pretty good ever since we have to go to the Upper Moon Six, Daki in action. In our last review of Demon Slayer Season 3 Episode 4, we talked about how Tanjiro has been facing Daki. In the recent episode 6, it was shown that Tanjiro has some pretty solid strength hidden in him. speaking of strength, we also got to see Nuzuko demon form which was on par with an Upper Moon. However, Nezuko awakened form has got some fans angry and we will discuss why exactly.

Well, the criticism is because that Nezuko is a 14-year-old character but her full demon form is suited to someone more than her age. Without getting into the exact details of her outfit it is fair to say that Nezuko transformation is clearly sexualized given her revealing clothes. Recently, we have been seeing a lot of female characters in Demon Slayer that are having revealing and sexualized outfits. For Example, Daki, and all three of Tengen Uzui Wives. The audience is used to such fan service in the anime however, in this case, the characters seem to be minor. And sexualizing a minor anywhere is just not okay. You can see Nezuko’s full demon form below.

Here is some of the criticism around.

“I understand she can adjust her size(apparently in many ways) but sexualizing a portrayed child/minor for fan service is something I don’t understand why Japan does(this is not just in demon slayer btw).” – Twitter

Another fan on the same platform says:

“I don’t care what Nezuko’s design looks like, whether it shows more or less skin on the original. There is no excuse to sexualize her, she is a minor. Seriously, what the hell is going through their heads to make them think it’s okay to sexualize a minor? Some of his comments are certainly unpleasant“

Is the criticism justified?

As per some fans, there is not a big issue with Nezuko’s sexualization and her awakened form. The reasoning is that when she went Berserk mode, she grew not just physically but also in terms of age. If she was 14 before, then after Nezuko demon form revealing, she turned to 16+ which as per some people is not minor. Well, our take on this is that Nezuko didn’t need to be sexualized one way or another, especially when originally she is a child character. Such revealing and sexualized outfits shouldn’t really be a norm in the media.