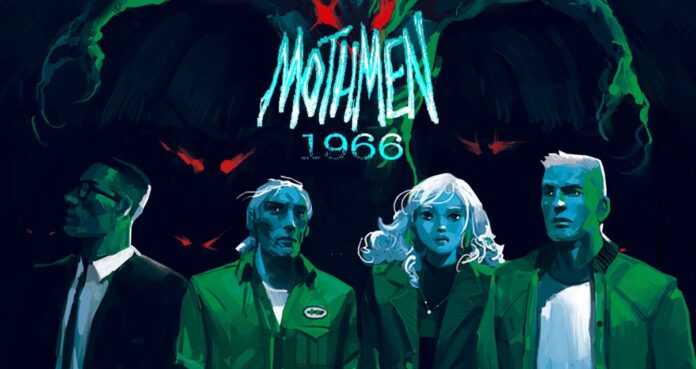 Mothmen 1966 is the first in Pixel Pulps, a new series of interactive adventures. Pixel Pulps is a mix of excellent writing and breathtaking imagery inspired by mid-century pulp fiction and 1980s home computer graphics, created by author Nico Saraintaris and artist Fernando Martinez Ruppel. Mothmen 1966, Varney Lake, and Bahnsen Knights are included in the first volume.

Mothmen 1966 is a ‘Pixel Pulp’ – a visual novel blending excellent prose with breathtaking imagery, inspired by mid-century pulp fiction and 1980s home computer graphics – set among the unusual happenings of the 1966 Leonid meteor shower. I must admit, this take on the meteor shower is new and interesting to experience.

Mothmen 1966 is a fun piece of interactive storytelling, styled after one of those point-and-click games from the late 1980s. The colours are the sharp cyans and toxic-themed greens recalled from the early CGA PC games, and the pixel graphics works miracles on the true-crime visual style. The depiction of forested landscapes in unexpected pools of light floating in darkness adds to the eeriness. The accentuation and shadows of the human face are portrayed in the most nostalgic way possible.

The story construction is top notch with a new idea being introduced. You play as a new character in each chapter, making story-changing decisions to keep these unpredictable strangers alive as long as possible. Enough to solve the secret behind the unusual happenings of the deadly animals. You need to be careful while making decisions.

The wrong option during risky confrontations might attract the attention of Mothmen perched atop streetlights. And as assumed, these will result in failed outcomes where you must redo the incident.

Where does Mothmen 1966 misses its mark?

Multiple choice situations frequently result in abrupt death, which simply requires refreshing and different alternatives until you discover one that lets you live. This makes the game experience a bit lackluster that only one wrong option can lead to the death of a character.

There should be at least two-three more options that would lead to death. This can be argued too as this game is more story and fewer choices so it makes sense sometimes.

Another problem that has been complained about is the lack of detailed chapters. The chapters are short and progress fast which makes this a short game; ending in a few hours at most. Also, the lack of a chapter select menu can be solved too as it can help players replay specific chapters they can relive.

This can also be given a second thought as it is meant to be an old-style game and at that time, technology was not progressed much. It can be a cause of short games as there wasn’t much space back then to store long games.

Keeping everything in check, Mothmen 1966 is a magnificent experiment. It has an engaging narrative distraction, and a nod to cryptozoology and classic computer graphics. It’s a captivating introduction to “pixel pulp,” yet it’s a bit hit or miss in regards to how much it keeps us craving more.

Although there are a few problems that can be overshadowed by the amazing nostalgic game style and a well-trimmed storyline. If you want to play it, do give it a try. Especially the ones who are 90s kids as it will surely make you nostalgic!

We will keep you updated on more game reviews so do keep tabs on our review tab. Also check these recent reviews: