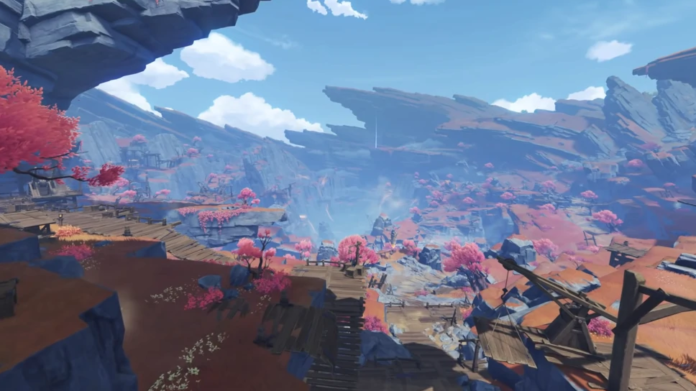 Genshin Impact is an open-world action and adventure RPG developed by Mihoyo. The Chasm is the new region introduced in Version 2.6, bringing with it a great number of quests, puzzles, and chests. For the quest “The Chasm Delvers: The Heavenly Stone’s Debris,” you need to find two keys to the gunpowder storehouse. The storehouse contains a cannonball which we need for the Mountainator to open a path that has been sealed off. So, to delve deeper into the chasm, we must complete this quest.

For the first key, fly down to the location marked on the map. It will be surrounded by Treasure Hoarders and Oozing Concretions, which you can dispel with your Lumenstone Adjuvant. Climb the barrel and break the pot on top of it. Interact with the “investigate” to obtain the key.

After that, for the second key, go to the location marked on the map. Make your way from the first location, you’ll have to jump deeper below. After jumping down a bridge, you’ll find a passage that is blocked by Oozing Concretions which leads to a small bridge. Run across the concretions and glide down from the bridge. This place will also be surrounded by more treasure hoarders guarding a common chest. There you’ll find an option to dig in front of a cave wall near a Lumenlamp. Interacting with it will reveal a Geo exploding barrel. After that, blow the barrel up by attacking it to break the wall, the key will be hidden inside the wall. Similarly, interact with the “investigate” to obtain it.

After finding both the keys, go to open the door to the gunpowder storehouse and find the cannonball. For more Genshin Impact guides, stay tuned to Retrology.