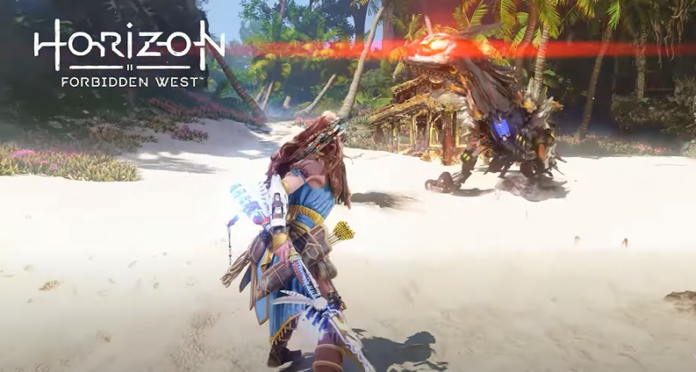 Horizon Forbidden West new gameplay has been revealed by the developers, Guerrilla Games and it majorly focuses on the new enemy types along with the combat strategies that players will be able to utilize with the protagonist, Aloy. Horizon Forbidden West is the second installment in the series and is slated to release on February 18, 2022. Based on its predecessor’s success and Forbidden West’s own anticipation, one can safely say that the new title is going to be huge. From new areas to explore to a new arsenal of weapons, to a variety of enemies, Horizon Forbidden West sure looks promising.

Speaking of Horizon Forbidden West new gameplay details, the developers have stated that the combat has been evolved a great deal as this time Aloy comes as an experienced combatant having more tricks and tools than before. In order to create clarity and new opportunities in a battle against machines or humans, Guerrilla has significantly improved the animation and the sound quality. This sounds simple but a lot of effort has been put to make these two things right as the impact these add to the gameplay is huge. For example, “Machines have unique audio cues that are designed to help the player distinguish between a melee or a specific ranged attack. Melee attacks are communicated by a distinct sound that builds up towards the impact moment, while ranged attacks are communicated through their weapon specific charge up sounds, or projectile sounds.“

Not just that, but a lot of research has been done in order to bring the Forbidden West’s machines to life. This time, the machines will be more immersive and challenging while each having its own unique set of abilities and personalities based on encyclopediac research.

There will also be new human enemies with their own combat behavior and functions to deal with. The players will have a choice to choose multiple playstyles as such stealth kills, close combat, or ranged attacks. Switching between close and ranged attacks will prove efficient in battles as shown in the clip below.

Lastly, the players will be able to collect and use multiple weapons and outfits fitting to their battle strategy. The workbench will be used to upgrade both the skills and the gear. As in the words of Combat Designer, Charles Perain, “The scanning mechanic from Horizon Zero Dawn is still in place, and will highlight your opponent’s weaknesses as well as their movement path. Don’t forget to craft potions and keep your berry pouch filled to the brim in case things go awry. And lastly, mix all the new traversal tools with our combat mechanics to create truly spectacular action!”