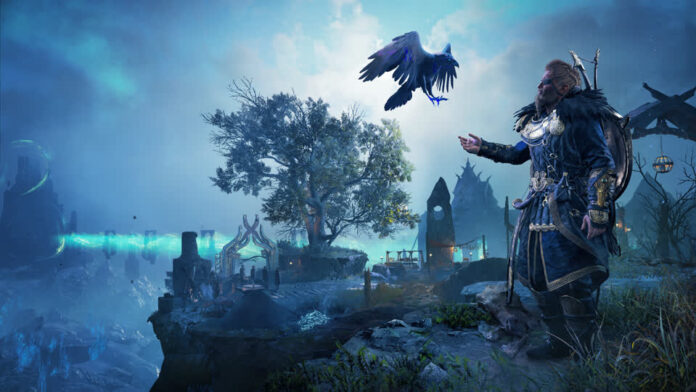 Assassin’s Creed Valhalla: The Forgotten Saga is intended to be a rough and tough style adventure in Niflheim’s land of the dead. This DLC delves deeply into the Norse fantasy realms introduced first in Dawn Of Ragnarök. With the new story, there are some other things that make the journey interesting. One of those is the merchants who are hidden throughout the map. They offer better and more interesting rewards than usual merchants. If this interests you, continue on to locate Forgotten Saga Merchants Locations.

The first merchant is King of theives. He is not easy to find considering how randomly placed his location is. He will emerge along your route as you travel across the realms of Niflheim. Your sole hint is a bag with a golden sign on your compass. However, until he’s nearby, you won’t be able to pinpoint his specific location.

To begin, travel to Bangardhr and then to the southwestern area of your map. You’ll see that the bag with the golden emblem has now appeared on your map. You want to scale the wall from here by climbing up on the stony surface to the left immediately beyond the entrance. This stone wall is the hardest part as you have to move keeping track of the ledges to make sure you won’t fall to your death.

After defeating the initial boss who dominates the first region, proceed to the next area to discover Dani the Dead One. After you discover him and chat with him, he will give you a hidden side mission called Dark Dealings in which you must release his crew.

You must locate a key in order to accomplish the mission. However, due to the random nature of the Forgotten Saga update, the location will vary from game to game. But the fundamentals stay the same: just scan an area for foes until one emerges with a key icon over his head. After that, all you have to do is kill that adversary to obtain the key.

Following the receipt of the key, proceed to Dani’s crew’s location. You may discover them on the right side before proceeding to the arena of the second boss. You’ll find them confined here, and all you have to do is unlock their cells using the key. Simply return to Dani and chat to him once you’ve freed up his team to finish the task.

You’ll now move on to the merchant section. A bag with the golden key will now appear on your map. That will serve as a signal for the hidden merchant. To reach there, you must ride down the zipline to the opposite side of the mountain. Then, take the elevator up to the platform and enter the tiny tunnel ahead of you.

Follow the tunnel till you reach the mine. Continue on until you reach a tiny flight of steps. Instead of ascending the steps, turn right until you reach a little ledge on the left. Drop down that ledge, pass through a tiny fissure, and continue on. Here you will meet Dar, the second merchant.

Start from the edge of the area as positioned on the map. From there, go left towards the bridge. This bridge looks rickety but it’s pretty stable to cross through. Go straight ahead and stop when you reach the wheel lift. Interact with it to fling yourself up as there is no other way to go there.

On this level, you will see stairs. Follow the stairs until you see a stone structure on your right. Go towards it but not all the way. During the path, you will see a ledge from where carefully jump down making sure to pinpoint a landing before taking the action. On the lowest level, go towards the right. Keep going along the wall until you reach a narrow opening. Here you will find the third merchant, Wolfsbane.

While choosing between the portals, choose the right side one; the one which is slightly higher than the other.

As soon as you spawn on the new location, you will meet a man sweeping the floor on your right. Talk to him and he will reveal himself to be a merchant. His name is Hel’s Majordomo.

That’s all for all four Forgotten Saga Merchants Locations in Assassin’s Creed Valhalla. Make sure to keep yourself updated with the gaming and guide section.