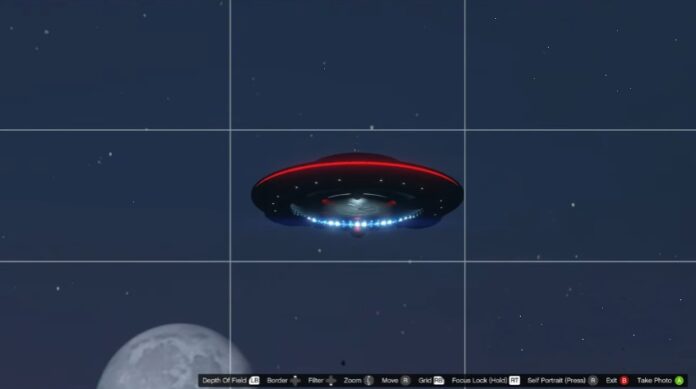 GTA Online is back with fun events with amazing rewards. There are some tasks for Halloween this time and one of those is UFO hunting. There are total of 17 UFO Haunting days so let’s start with all the UFO locations in GTA online. All the Expected GTA online UFO locations are as follows:

The first location is Paleto Bay Peninsula. Look out towards the sky facing away from land. The UFO would be on a little right of the locations mentioned.

The second location is above the sunken UFO In Paleto. The UFO itself spawns really far away from land so it’s easier to stay away while capturing the picture.

Look towards the peak of the Mount Chiliad and you’ll find the third UFO there. You’ll need to go up a little to get a clear shot of the UFO but don’t go too far.

You can go up the road until you see the El Gordo Lighthouse and stop just there. Take the picture from there as UFO would be just above the lighthouse.

Go to the location of Altruist Camp and you’ll see the UFO on top of the hill there. You can easily spot it from a far.

At the Silent Probe Mountain, look at the inclines rather than the peak and there you’ll find this sixth UFO.

The seventh UFO is right above the Satellite Relay Station. There is plenty of empty area around it to capture it from a good distance.

There would be two UFO’s for ninth day.

The next location is the Patriot House. You’ll find the tenth UFO right above the houses or the hills. The exact locations are not confirmed as it disappears as you go close so just look over that area.

The Farm is an open area which makes spotting the UFO much easier. Just go close enough to get a clear capture of it.

The new UFO location is Paleto Area for one of the 13th UFOs. There would be some more available too and those could be spotted in the locations where they previously spawned. The locations given above other than Paleto Area are expected locations but do explore other areas too.

Altruist Camp, Farm, and Zancudo are the three locations where the UFO can spawn for this day. All of these locations are already the ones you may have visited before so just go and check those. Look around for others too.

You’ll find the 15th UFO at the East Blaine County location. The rule for this day about more UFOs is similar to 13th and 14th.

As the event comes to an end, the UFOs increase in number. Following are the locations where they would appear:

This is the last day of the event and on this day, you’ll see a total of 14 UFOs in the sky. On this day, you can go up close to the UFO too as it won’t disappear now. Go around the city and look for the UFOs everywhere as there is no confirmed location. Good Luck!

The storm will start and you won’t be able to walk out without getting abducted. If you want, you can try it too as once you are abducted by the UFO, you will black out and wake up randomly in a field. There would be one change though, you’d have Alien Exclusive boxers on.

With that note, let’s end this long list of GTA online UFO locations. For more help in games, check out the Guides and learn about new tasks and events.