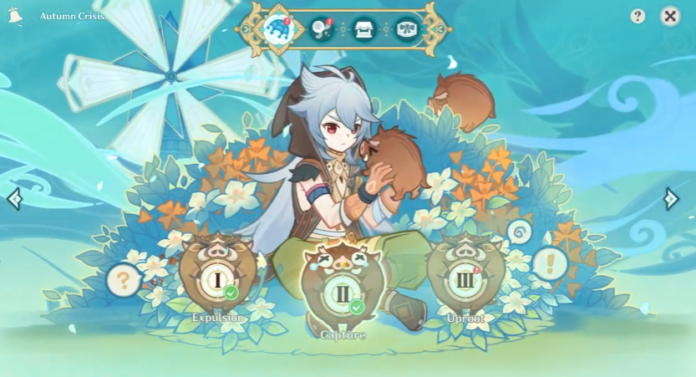 The third installment of the Autumn Crisis sub-event from Of Ballads and Brews, the main event of Genshin Impact 3.1, is called Uproot. You will be given the duty by Farabi and Edmund to apprehend the Great Snowboar King in order to conduct research. Here’s a guide to help you complete this mission of capturing the Great Snowboar King in Genshin Impact.

The Great Snowboar King is a unique opponent and mini-boss in Dragonspine, east of Entombed City called Ancient Palace, and an objective of the “Ah, Fresh Meat!” global quest.

The Great Snowboar King can be located west of the Skyfrost Nail or southeast of Dragonspine’s Statue of the Seven. Once they are close enough to the spot, players must glide down to the specified area where they can see frozen Boars. You ought to have unlocked the Great Snowboar King if you’ve finished the “Ah, Fresh Meat!” quest line.

Players must thaw the frozen Boars and kill them in order to call the Great Snowboar King. Until their flesh is harvested, these Dragonspine Boars would roam aimlessly, unlike typical pigs that would fly away when disturbed. After the three boars are vanquished, the Great Snowboar King will emerge from a little mountain ding.

How to Defeat Great Snowboar King

Although the mechanics of this challenge are similar to those of the previous ones in Autumn Crisis, the damage from your Normal Attacks will be insignificant compared to the Great Snowboar King. Given that there is a countdown for this, you might exhaust your time limit before the boar sustains any real harm so be careful of that.

Now let’s get onto the process of how to defeat him. Before anything else, start off with eating something that will keep you warm. Keep in mind that this area is extremely cold and you will need some kind of warmth to proceed.

Stun it at much as you can

You won’t do much damage to the boar with your normal attack. You must first knock it out in order to deal more damage and eventually capture the Great Snowboar King. There are multiple ways of knocking it out with a few being:

In the later half when small boars are summoned, deal with them first. If you keep them stalling, they will become a bigger hurdle and waste your energy. Also with them around, you won’t be able to reach the main boar so eliminate them first.

Alternate between Quick and Heavy Attacks

This is important because quick attacks are easier to use while running around. Since Snowboar uses to charge a lot, you’ll need to move out of the way fast. Keep striking it with fast attacks whenever you see an opening.

On the other hand, heavy weapons or attacks are also must have. This is because there is a timer for this quest. Once the fight has begun, the timer will start and you’ll need to defeat it faster. For this, use heavy attacks while it’s stunning. Focus on stunning it for the most part and using heavy and powerful attacks to finish it off as fast as possible. Once the life drops to zero, the quest would be completed and you’ll be successful in completing the capture part.

The reward for defeating the Great Snowboar King quest is 6-10 chilled meat from each encounter. Yes, you can defeat it again as it respawns in the same place after every 20 hours. Gather as much chilled meat as you want!

That’s all on how to find, defeat and capture the Great Snowboar King in Genshin Impact. If you’ve missed anything, you can check our Genshin Impact guides sections and see through the ones which you want.