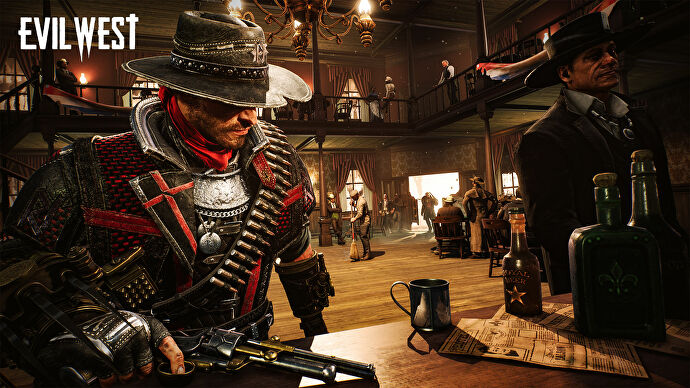 Fans of the upcoming bizarre wild west shooter Evil West have a treat in store from publisher Focus Entertainment and developer Flying Wild Hog. In preparation for Evil West September release, the teams have produced a 10-minute extended gameplay trailer for the FPS, which features a mix of cinematics and gunplay.

The developers display some of the mechanics you’ll use throughout the game in this new extended gameplay trailer for Evil West, including grappling and swinging across trenches to get to regions inaccessible by foot. Of course, because you’re attempting to eradicate the vampire problem in the United States, the clip contains lots of gunplay and physical combat action.

In the new teaser, you’ll meet gunslinger Jesse Rentier, who’s on a mission to rid the world of a supernatural threat. Combining melee assaults and terminating an opponent with a few shots from your revolver appears to be a really pleasant experience.

You play as Jesse, the last man standing between humanity and the vampire onslaught. Jesse is fighting a personal struggle against major personalities in the vampire world while working as an agent in his father’s secret monster-hunting organization.

Long-range warfare is handled by lever-action rifles, whereas close-range combat is handled by fanning the hammer of a revolver. There don’t appear to be many melee combinations in the film, but it appears that we’ll be maximizing damage by punching adversaries into spikes, for example.

We get a look at other supernatural weapons later in the film. Because Evil West is set in an alternate version of the Wild West, items like electric gauntlets and other technological weaponry are justified.

You’ll employ an armory of weaponry and guns that you may upgrade, as well as perks that you can evolve, to combat the threat. You can do it by yourself or with a companion.

On September 20th, Evil West will be published for PC through Steam, PlayStation 5, Xbox Series, PlayStation 4, and Xbox One.

We also cover a lot of gaming and guides so be sure to check those out as well. For more content like this keep following Retrology.