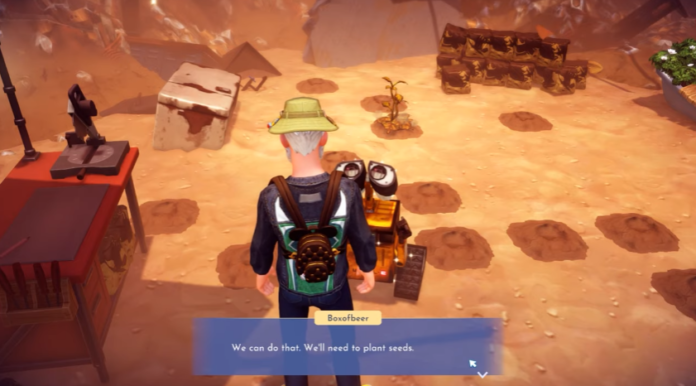 In Disney Dreamlight Valley, there are different characters you can unlock after doing certain quests lined up for you. Some can be unlocked after a series of quests while some are easy to interact and hang out with. One of the characters in this game is Wall-E from the famous movie, Wall-E. If you want to unlock him, you’ve come to the right place as this article is on how to repair Disney Dreamlight Valley Wall E.

Contents
1) About Wall-E
2) How to Repair and Unlock Wall-E?
3) After Wall-E is repaired

WALL-E is about a robot, a lone robot, who is left to pick up waste on a future, barren, deserted Earth in 2805. No one is on Earth now and he is alone on this whole land. One day, he is visited by a probe sent by the starship Axiom, a robot named EVE, with whom he falls in love and follows across the galaxy. The character is quite shy and friendly so do repair him and hang out with this small robot.

How to Repair and Unlock Wall-E?

To begin, you must enter the Dream Castle and pay 3,000 Dreamlight to unlock the door that leads to Wall-E’s realm. From there, you must locate Wall-E and complete a series of objectives in order to assist him. When you first speak to the nice robot, named Wall-E, you find he can’t move since he’s trapped in the sand beneath him.

After Wall-E is repaired

Interact with him for a little conversation. In this conversation, he’ll ask you to plant some trees. You can plant by using a bag of seeds. This can be bought at the shop if you don’t already have it. And just like that, you have finally unlocked and repaired Wall-E.

There are other quests you can cover after the repair. You can climb up on the friendship tier list too so good luck with that. About Disney Dreamlight Valley Wall E guide, this is it. For more help in future topics, head over to the gaming guides section.