Coca-Cola Zero Sugar Byte, a Pixel-Flavoured Beverage Coming First To The Metaverse, On Sale from May 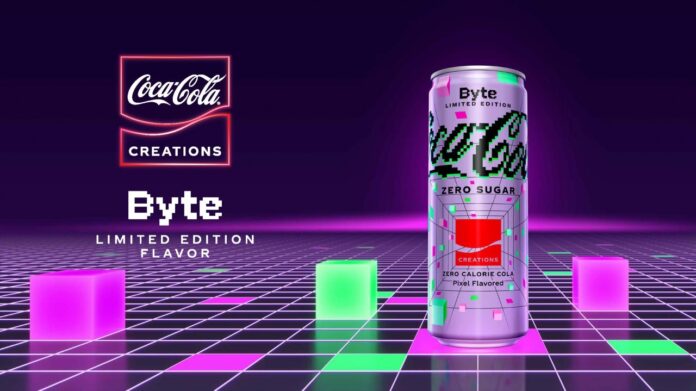 Earlier this year, the soft drink company launched an outer space-flavoured product. Now it’s continuing its technological game and trying to broaden its appeal among younger, tech-savvy consumers by launching a pixel-flavoured drink.

It is an extension of the brand’s ongoing “Real Magic” campaign. Byte will be introduced into the metaverse in collaboration with lifestyle and gaming organization – PWR. The real and drinkable version is coming in limited in May. The virtual version of Byte will first come to an “individually created Fornite Creative experience” called the Pixel Point.

An augmented reality game can also be accessed at the Coca-Cola Creations site. This will feature a virtual leaderboard to compare completion times on social media.

You can purchase Coca-Cola Zero Sugar Byte from May 2 through the Coca-Cola Creations site. Coca-Cola says “Byte will be packaged in 12-ounce cans and sold in packs of two”. One will be for consumption while the other can be safely collected.

The new product launch is directed toward the gaming community which is now a major target audience in the ad world as Roblox, Discord, and more meta-verse based platforms continue to get more noticed. Moreover, this is like a homage to the pixel which is one of the building blocks of video games.

According to Coca-Cola, the drink tastes like pixels. It brings the flavour of pixels to life.

“What I find especially exciting about this Coke Creation is the intentional air of mystery in defining the taste of a pixel. We know that any new Coca-Cola Creations expression will provoke debate and curiosity which we welcome,” Oana Vlad, Coca-Cola senior director of strategy.

This is all on the new Coca-Cola Zero Sugar Byte. We also cover a lot of the latest news and tech-related articles so be sure to check those out as well. For more content like this keep following Retrology.