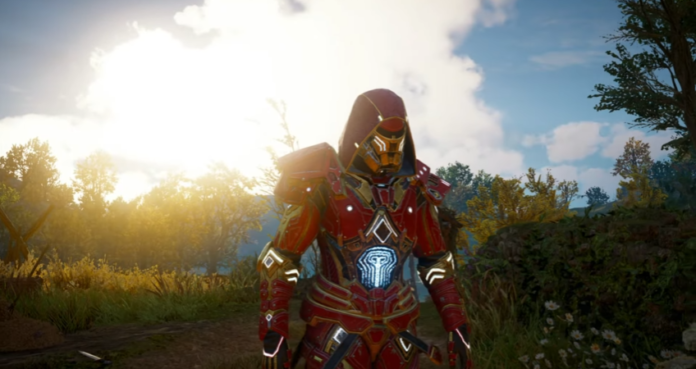 Ubisoft is not new to adding new interesting crossovers to the Assassin Creed franchise. Following on that theme, they have now released a new suit that resembles Iron Man’s getup. Not only the armor, but the laser attack from his chest is also part of the suit. This makes the suit an authentic crossover, not a costume party equivalent suit. Props to them for that!

The armor was discovered, by an Assassin’s Creed gamer called AndyReloads. He is quite famous for extracting secret or unique items in-game which later proved to be true; a reliable source. The YouTube videos show a red-and-yellow armor suit that shoots a laser beam from the chest. As well as a white model that appears to be identical can be seen too.

Each of these looks right out of Iron Man’s Laboratory. Here is the video which made this suit famous.

This suit looks more like a stormtrooper and is not yet marketed so let’s see what Ubisoft calls it. In Valhalla, the Unibeam is said to be activated via the “Battle cry” skill. As for the unibeam itself, foes can die to it. If they do not die immediately from the beam it might be due to an error in accuracy.

This is the traditional Iron Man suit, or closest to it. This Advanced Mechanical Copper version is most definitely a homage to Ironman. With red and gold coloration flowing throughout the suit as well as a clear blue arc reactor in the heart of the armor set signifying it.