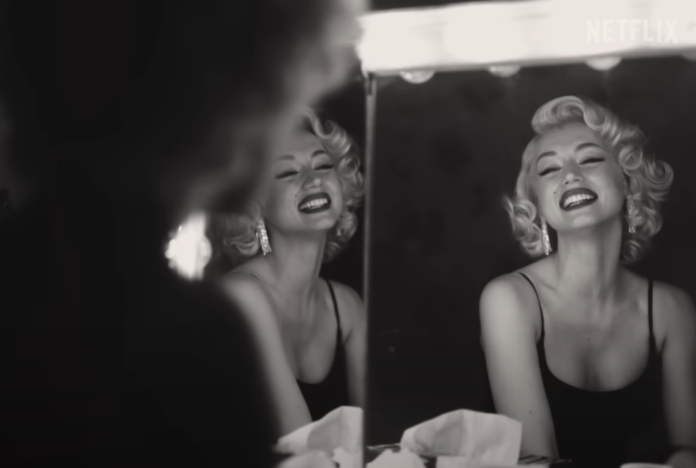 Blonde is a fictionalized take on Marylin Monroe. It tells the story of the depressing details of her life that is unknown to others. It is an adaptation of Joyce Carol Oates‘s historical fiction novel Blonde written in 2000. Marilyn Monroe’s Character is played by Ana de Armas in Blonde, the upcoming film with other noteworthy names like Adrien Brody, Bobby Cannavale and Julianne Nicholson appearing in other roles alongside her.

The film began production in Los Angeles in August 2019 after getting it into pre-production in 2010. Production for this film was warped in July 2021 after the COVID pandemic. This is not the first Marylin Monroe biopic as The Mystery of Marilyn Monroe: The Unheard Tapes was also released this April and is really gripping for people of interest. But it sure is the most interesting as it shows her naked life with no screens which can be complicated to say the least.

The official trailer was released on June 16, 2022, which can be seen on the Netflix official YouTube channel. This trailer also announced its release date which is on September 23, 2022 on Netflix.

Dominik discussed his fascination with Marilyn Monroe, stating, “Why is Marilyn Monroe the great female icon of the 20th Century? For men she is an object of sexual desire that is desperately in need of rescue. For women, she embodies all the injustices visited upon the feminine, a sister, a Cinderella, consigned to live among the ashes […] I want to tell the story of Norma Jean as a central figure in a fairytale; an orphan child lost in the woods of Hollywood, being consumed by that great icon of the twentieth century.“

Contents
1) How is the Trailer?
2) Premiere Process

How is the Trailer?

This trailer shows her conflicting personality; the one she shows others and the one she hides. Not much can be said about the movie but by the trailer it can be sure it will fall into the category of one of the finest projects ever done on Marilyn Monroe. The actor, Ana de Armas in Blonde as Marilyn Monroe has done a great job that can be alone be told by the trailer.

Not to forget the last scene of the trailer, and possibly the most talked about, where she looks in the mirror an showcases so many emotions going from sorrow, lost to smile and a giggle that is known to all the people around us.

The hurt in her eyes turns to happiness which she hides behind to show herself as this happy women which she clearly was not. The true human embodiment of not everyone famous is happy and can be having their own struggles behind the closed doors.

In August 2016, Netflix announced the film’s release. The film Blonde was invited to debut at the Cannes Film Festival in June 2021, but this offer was rejected by Netflix. The reason being that it wasn’t complete and they wanted to showcase it on its completion. The director, Dominik, informed in a 2022 interview that the film may be selected to be screened at this year’s Cannes Film festival and Venice Film Festival.

He partially succeeded as it is rumored to be chosen with a high chance of probability to be screened at the latter, Venice Film Festival. He also commented that the film will keep its NC-17 rating. It can also be a factor of it being harder to accept for every platform thus it not being widely acknowledged.

Now all left to do is wait for it to see if it delivers as it promises. In the meantime, check out the top June 2022 Movies that should be on your watchlist to get you trough this summer.