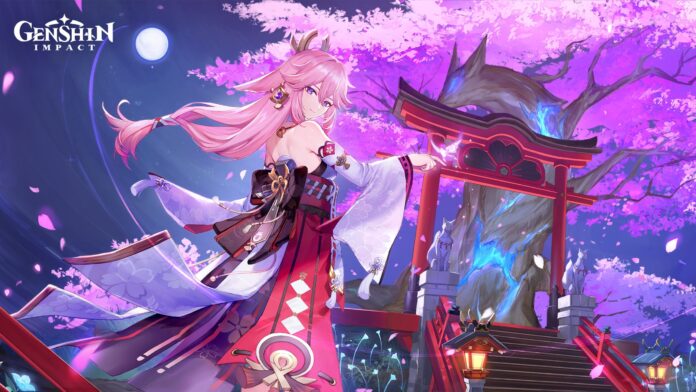 For the first Spincrystal, teleport to the Grand Narukami Shrine waypoint. You’ll find it on top of a rock, right next to a small shrine on your right.

The second Spincrystal is right in front of the Chinju Forest waypoint. It can be found on top of a rock next to a Tanuki statue.

From the location of the last Spincrystal, go northeast across the lake. You’ll find the Spincrystal on top of a rock next to the stairs, adjacent to two shrines.

Go further northwest from the location of the previous Spincrystal. The Spincrystal will be on top of a pillar right behind Ioroi.

Teleport to the Kamisato Estate waypoint and enter the estate. On the right, next to a shrine in front of Toda, you’ll find the Spincrystal sitting on a rock.

Next, go towards the Yashiro Commission headquarters, and climb on the roof. It may be easier to reach there with characters like Keqing, Zhongli, Venti, Kazuha, or Albedo. Similarly, using Geo Traveler’s skill constructs may also help reach there. The Spincrystal will be on top of the roof of the main building.

Radiant Spincrystal #49: The Land of Her Serenity

Teleport to the northern waypoint in Inazuma City. From here, go left to the edge of the city. Walk down the wooden bridge till you see a ramp and a few boxes in a corner. The Spincrystal will be on top of the highest box.

Finally, for the last Spincrystal teleport to the waypoint in front of Tenshukaku. Go towards the Statue Of the Omnipresent God, you will find the Spincrystal on top of some wooden boxes.

These are all the Radiant Spincrystals in Inazuma. The remaining available Inazuma Soundtrack can be bought from Chubby. Moreover, if you are having trouble with the Chasm, you can check our guide on all Lumenstone Ore locations to level up the Lumenstone Adjuvant. For more Genshin Impact guides, stay tuned to Retrology.