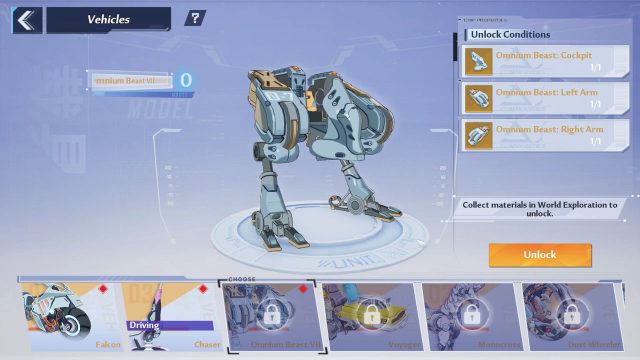 Tower of Fantasy offers a variety of vehicles and devices to aid you in your journey. There’s the motorbike, which increases your movement speed, the jetpack, which increases your leap and allows you to hover, and the jet board, which allows you to go over the water. This article will explain to you how to obtain the Omnium Beast Part Locations Tower of Fantasy for the Omnium Beast Mount.

This article will teach you how to obtain the Omnium Beast VII Vehicle in Tower of Fantasy. Three components are required to unlock the vehicle:

For the last piece, the left arm, you need to polish your fighting gear. To get it, jump off the area where the shelters are and you can find the monster there. Once this monster is defeated, you will get the left arm.

Unfortunately, the drop rate is really low making the chances of you encountering the monster very low. So be patient and keep looking.

This is it for the Omnium Beast Part Locations in Tower of Fantasy. The last one can take a lot of time but for the other two parts, you can get them easily. For more guides on the tower of Fantasy, head towards our guides sections on the site Retrology.

Tower of Fantasy Artificial Island Boss (How to get to him)