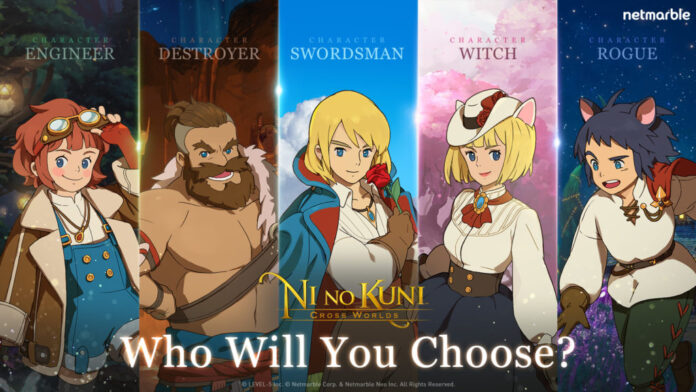 Ni No Kuni: Cross Worlds is a cross-platform MMORPG developed by Netmarble that is available on Android, iOS and Microsoft Windows. Featuring animation from Studio Ghibli, the newest instalment of Ni No Kuni unleashes you into an open world, built on Unreal Engine 4, that is indistinguishable from the animated film. Today we’ll explain the Ni No Kuni Cross Worlds Classes.

The allows you to have unique, customizable characters. This is where the idea of classes comes in. Build your character and decorate your own farm along the way. Join a kingdom and make friends in this online masterpiece. You can get Ni No Kuni Codes and find other gaming content on Retrology. Now let’s see the Ni No Kuni Cross World Classes and find the best one.

Rogues are a hunter type class as they have great mobility and they can damage enemies from afar. They can also kite. Rogues can also provide party-wide damage buffs and they also have crowd control abilities.

Destroyers can be slow but they are very powerful. They have defensive shielding abilities. They are also the type of class that can ‘tank’ best which makes them the ‘tankiest’ class. It has the power to pull and slow down enemies.

Witch is the damage class. It can deal high amounts of damage to the enemy. It also has high mobility and the best part about it is that is has lots of debuff abilities which, if used in the right combo, can be very effective.

Swordsman is indeed the best class to have because it is a hybrid class. It employs abilities from many different classes and this makes it diverse and versatile. It can swap between offence and defense and it has the power to blind enemies as well.

We hope that this information will help you choose the best from the Ni No Kuni Cross Worlds Classes. Jump right into the game and defeat all the enemies that stand in your way.

How to get a Mount in Ni no Kuni Cross Worlds