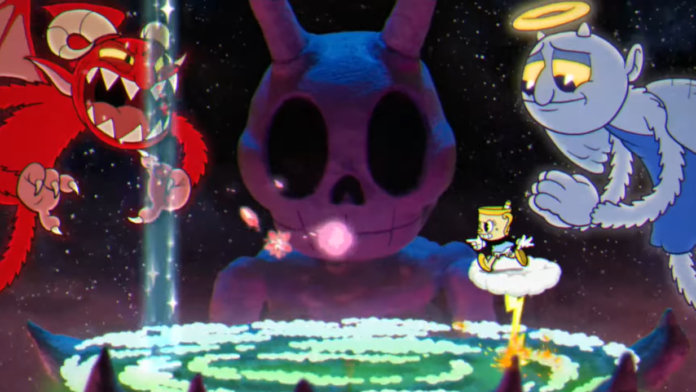 Cuphead: The Delicious Last Course is an expansion of the game Cuphead, which was released in 2017. The game is developed and published by Studio MDHR and came out on the 30th of June, 2022 for Nintendo Switch, Xbox One, PlayStation 4, and PC. In this guide, we’ll share some tips to help you beat a secret boss in Cuphead DLC, Angel and Demon.

Cuphead: DLC makes use of animation styles from the 20th century, but has ridiculously smooth graphics. It has many different bosses players have to challenge, all of which have different designs, skills, and attacks. All these bosses require different strategies making this game a must-play for players who like difficult content.

To unlock the secret boss, the first thing you need to get is a Broken Relic from the shop, Porkrind’s Emporium. You need to have it equipped to solve the graveyard puzzle which you need to fight the boss. You will have to look for clues in Inkwell Isle Four, particularly the place shown below.

Interacting with the NPCs standing on the stand gives the order of graves you need to solve the puzzle. Keep in mind the puzzle does not have one solution, it may be different for others. You’ll have to figure out the answer to your puzzle by paying attention to the clues given by the NPCs, mostly just directions like “right,” “left,” “up,” and “down”.

This boss is the only boss which is not a mini-boss yet only has one stage. As a single-stage boss, Angel and Demon are very easy to fight. Although we say Angel and Demon, our only enemy is the Demon.

Keep in mind in this fight Angel will always be behind us, if you turn around, the Devil will switch places with the Angel and be in front of us. Furthermore, Angel’s attacks do not deal any damage. It has two main “attacks”. In the first one, it throws a halo or a pink fireball towards us, neither of which deal damage.

Angel’s second attack overlaps with one of Demon’s attacks. When you see Angel singing, a wall of water is created. On the other hand, when you see Demon scowling, a wall of fire will be created. There can only be one wall on the platform at a time, and if the current wall is fire, Angel’s singing will turn it into water. The same applies to Demon turning a wall of water to fire.

Demon’s main attack is spouting fireballs. These usually come in sets of three, the third one can be parried. Besides these, there is one last mechanic in the fight. During the whole flight, a cloud of lightning will be floating around. If the lightning hits the player, they take damage, however, it can be dodged by getting on top of the cloud.

That’s all the tips we can give to beat the Cuphead DLC secret boss Demon and Angel. The battle ends and you beat Demon and Angel when they both disappear into the eyeholes of the skull at the back. Additionally, if you are a Dungeon Fighter Online fan, here’s a guide to help you unlock Lost Warrior in DNF Duel. For more Cuphead DLC Boss guides and other gaming guides, stay tuned to Retrology.