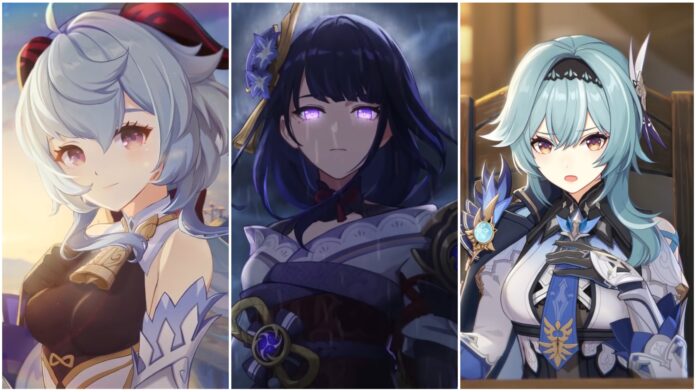 Genshin Impact is an open-world action and adventure RPG developed by Mihoyo. The game is packed full of different interesting characters. As of right now, the game has 51 characters. Of these 33 are females and 17 are males, excluding the traveler. Safe to say the Genshin Impact female character category is definitely huge.

Each character in the game has heart-wrenching lore, making it impossible for us to compare their pasts. However, we will share a part of their stories along with what makes them so strong in the game.

Although not much was known about her at first, the recent event’s story quest showed us another side of her. She is originally not from Mondstadt, she used to be the apprentice of a renowned Hydromancer. She found a way to combine Hydromancy and Astrology making her rather reputable.

Additionally, Mona can tell a person’s true intentions and fate easily. The quest showed how the people whose fate wasn’t what they had hoped called her a fake. Moreover, she told an adventurer, who once helped her, to quit adventuring at the soonest to try to avoid his fate. The adventurer believed her, but kindly refused and later died, leaving Mona with lingering regret.

Mona is one of the permanent 5 stars. Her best role is that of burst support which provides a buff to the active character. She is easy to build and can fit into any team, and her best weapon is a 3*, Thrilling Tales of Dragon Slayers.

The latest and most mysterious characters in the game yet. We do know that she works for Ningguang and as a cover works at Yanshang Teahouse. She rarely shows up for work at the Ministry of Civil Affairs, but is always successful at collecting intelligence. As to how she collects them? Let’s just say she uses her means.

She’s usually calm, but rather sly when it comes down to it. Yelan is a really strong character, often used in teams as a replacement for Xingqiu. But naturally, as a 5* she is quite stronger than him. Building her is also not particularly hard, but it heavily depends on how you want to run her. You can check this Yelan guide for her detailed builds.

Another character whose past is not clearly shown. Nonetheless, we know that Hu Tao is the Wangsheng Funeral Parlour’s Director. She often takes souls to the place where they stay before they go to the afterlife.

Hu Tao is one of the strongest DPS in the game and probably the strongest pyro DPS yet. She converts her hp into attack and also received an attack bonus once her hp is below 50%. Since she constantly needs low hp to maximize her damage potential, it’s recommended to run her with a shielder.

Eula, in reality, despises the actions her ancestors had taken in their greed. She was also abused by her family, yet, she still tries to redeem the Lawrence name. She has joined the Knights of Favonius, perhaps to protect the people of Mondstadt and change their perception of her.

Eula’s “Favonius Bladework” is basically a dance she had once learned which she now uses as an attack sequence. Eula has one of the largest burst multipliers in the game which deals massive Physical damage. Building this cryo character as a physical damage dealer is the best way to maximize her damage potential.

Next, we have Raiden Shogun or Raiden Ei. Raiden Ei is the Electro archon who made, and lives inside, Raiden Shogun. The first Electro Archon was actually Raiden Makoto, Ei’s twin sister. Raiden Ei was the weapon of her sister Makoto, both were the opposite sides of the same coin.

However, Raiden Makoto lost her life during the cataclysm 500 years ago. Besides that, she had lost her three closest friends too. Not sure how to deal with her loss, Ei set out to preserve Inazuma, for eternity. She created Raiden Shogun who’d follow all her orders and achieve eternity using the means necessary. And inside the Plane of Euthymia, she spent her time meditating pursuing eternity herself.

As the story progresses, Ei changes significantly. She accepts humanity’s desire to progress and takes interest in the new changes. After a long battle with Shogun, she also becomes the primary host of the Raiden Shogun.

Raiden Shogun is a powerful support and sub-DPS character. She scales off energy recharge and provides energy to her team too. In her burst, she changes weapons from a polearm to an electro-infused sword. She also increases the active character’s burst damage.

Ayaka was one of the most anticipated characters of Genshin and she did not disappoint. She’s the daughter of the Kamisato Clan of the Yashiro Commission. After the early death of her parents, she and her elder brother were left alone to take care of the clan and the commission.

After years of struggles and pushing through the rumors that the clan would fall with mere children handling things, they were able to stabilize the commission. Ayaka is known as the Shirisagi Himegimi, as perfect as she is, she is also the face of the Yashiro Commission, whereas her brother takes care of all the inside work.

Her burst summons a snowstorm that moves forward, attacking all enemies in its way. In addition, after using her special sprint, her weapon gains Cryo infusion and her Cryo damage is increased by 18%.

Our very favorite Genshin Impact female character is Ganyu. The thousands of years old half-Qilin Adeptus, also called “Coco-goat” by the community, is at the top of our list. After Liyue entered more peaceful times, she became the secretary of the Liyue Qixing.

She is quiet and reserved and tends to push herself. Due to constantly working overtime, she always seems sleepy. She always gets flustered when asked about her childhood, or her forgetfulness and horns. For a long time Ganyu stayed in Liyue Harbour she has seen people come and go and see Liyue form into what it is in the present.

This gentle and elegant Cryo archer is the strongest damage dealer in Genshin. With Ayaka being the only one who comes close to taking her place. Her charged attack, Frostflake Arrow, has a high damage multiplier, and at Charge level 2 The Frostflake arrow deals AOE Cryo damage. Additionally, her burst provides Ganyu with further Cryo Damage Bonus.

Tell us who your favorite Genshin Impact female character is in the comments below! You can also read the overall best Genshin Impact Characters here. For more gaming content, stay tuned to Retrology.

All new characters coming to Genshin Impact in 3.0