What if Video Games were Classic Comics 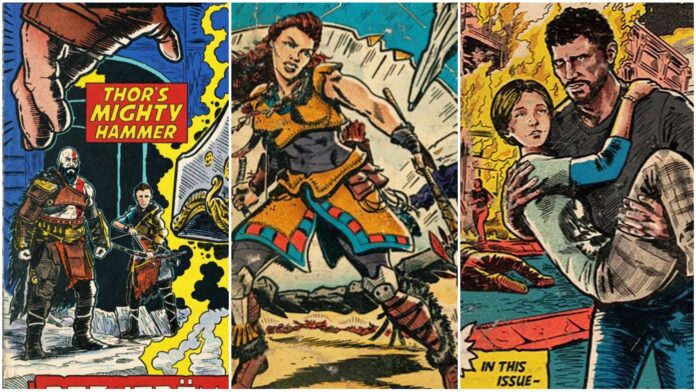 Video games and comics have always been one of the most interesting forms of entertainment among teens. While comics are not read as often these days, video games have come a long way from what they were before. This amazing artist imagined what video games as comics would be like.

The artist Mark Scicluna has made some stunning comic covers based on famous video games. Even adding effects used backing in the 20th century and making the covers look old. We have listed down some of our favorite fan art by this amazing artist. However, we think each and every one of them is worth checking out.

Red Dead Redemption is an action-adventure game developed by Rockstar San Diego and published by Rockstar Games. This amazing cover shows the main character of the game, Arthur Morgan, surrounded by dogs.

The game is a run-and-gun shooter developed and published by Studio MDHR. The artwork shows Cuphead and Mugman being chased by a monster.

Ghost of Tsushima is an action-adventure game developed by Sucker Punch Productions and published by Sony Interactive Entertainment. The cover shows Jin Sakaai, the character the player controls, in a battlefield.

Next, we have Dino Crisis, it is a survival and horror game developed by Shinji Makami and published by Capcom Co. Limited. The art is showing Regina confronting dinosaurs with a gun in her hand.

The Order: 1886 is a third-person action-adventure game developed by Ready at Dawn and published by Sony Computer Entertainment. The cover made by the artist as a comic features the central characters in the show alarmed and armed as a monster lurks behind them.

Metal Gear Solid is another action-adventure game with stealth functions. The artist illustrates an overview of characters on the left and features Meryl Silverburgh and Psycho Mantis, the primary villain, in the middle.

The Last of Us

It is an action-adventure game developed by Naughty Dog and published by Sony Computer Entertainment. The art actually shows the main character, Joel, and his brother and daughter, meaning it focuses on the events 20 years prior to the game.

Resident Evil is a horror and action game developed and published by Capcom. This chilling art in particular references Resident Evil Village and Alcina Dimitrescu.

That is all our favorite games as comic arts. Be sure to check out the artist on their website or Twitter and support them. Additionally, you can also check out what these Street Fighters V: CE characters would look like if they were females. For more fan arts, stay tuned to Retrology.

Top 7 games like God of War that you will love

Getting The Skykiller weapon in Horizon Forbidden West (The Way Home...

All Black Box Locations in Horizon Forbidden West (Wings of the...