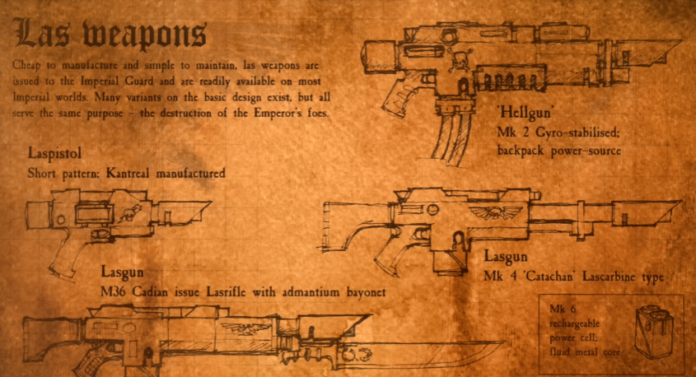 In Darktide, players can obtain a variety of melee and ranged weapons. Because of the varied stats of each weapon, all weapons are useful for serving diverse roles and techniques. These weapons further have some types which distinguish them from each other than their core. Today we will talk about the Lasgun Variants in Warhammer 40K: Darktide with details on how they differ from one another.

The Lasgun, sometimes known as the Lasrifle, is a directed-energy antipersonnel weapon. A Lasgun has a greater range than a Laspistol, but it lacks the strength of a Lascannon and the rapid-firing capabilities of the Multi-Laser or the Hellgun.

These are the three main variations of the Lasgun which differ a lot from each other. There are many other variants that fall under these three categories and can be distinguished by their minor differences. With that out of the way, let’s get into other major differences between these three types.

You can call this variant all-rounder or basic as this is the most toned-down form of Lasgun. It is what a simple Lasgun would be like. Due to it being basic, it is the first one to be available for the players to use. Everything about this gun is moderate; from fire rate, to damage so it’s a good gun in all situations.

Damage: Moderate Damage per each bullet

Best For: Works okay in both situations: Targeting a large number of enemies or a singular target

If you like to spray bullets at enemies and take on crowds of opponents, this gun is for you. Even though it has low damage, it is still helpful if you want to keep opponents away and break them slowly making the task easier. It has a medium range which makes it a good gun to spray at a good distance.

Best For: If you like to shower enemies in a machine gun style. Works best for targeting multiple opponents in crowds.

This is one of the best variations of Lasgun. It has a slow fire rate but that is made up by its tremendous damage. The choice between non-charged and charged shots also gives you control over how much damage you want to inflict. Due to its high damage and good accuracy, it is one of the best weapons for players who like to play as snipers. Although it lacks a little accuracy, a little practice may make it easier for you to use it.

Damage: Heavy damage. Charged shot which can inflict a lot of damage if aimed correctly.

Best For: Best for targeting a single opponent. A good choice for snipers for easy shots.

Accuracy: Moderate accuracy. A charged shot can be more accurate than a non-charged one.

That’s all for the differences in Lasgun Variants for Warhammer 40K: Darktide. For more related game help, check out the guides section.

Guide to Complete the Deadeye Penance in Warhammer 40K: Darktide