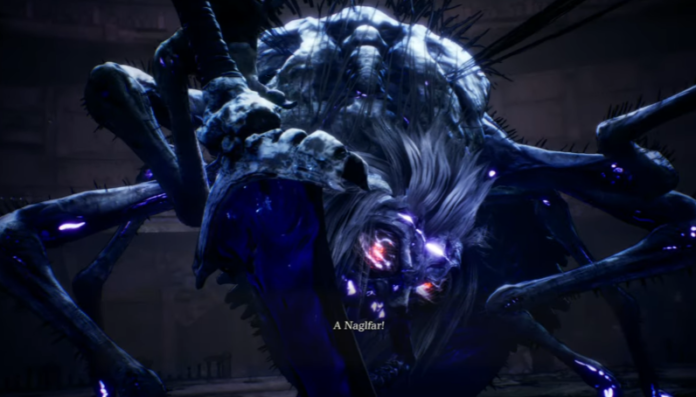 In the video game Valkyrie Elysium, the player can follow Maria, a Valkyrie’s journey to save the world and battle numerous foes and bosses along the way, you go about completing assignments for the All-Father Odin. The game is an action role-playing game with gameplay mechanics resembling numerous Souls-style games but with more RPG components incorporated. At the very conclusion of the game’s first chapter, there is a boss fight called the Naglfar Eygon. Since he is a boss, you may need some help defeating him and this Naglfar Boss Fight guide is going to do just that.

Here are the following attacks used by the Naglfar Boss during the fight:

He lunges forward and will try to crush you with his body strength. This attack is what starts the battle. Make sure to dodge it as sometimes the tackle is followed by another attack. Also, fast action is sometimes unavoidable so be careful.

There are two types of sword attacks he uses. One is where he slashes across the area. For this one, you’ll need to move away fast. the second one is where he lunges the sword to the ground. This one is easier to avoid and leaves a lot of room to attack.

If you stay away for a while, he will throw out a purple shockwave which stays for a few seconds. Just keep your distance and jump away as much as you can. Distance is better here than finding a window to attack.

Naglfar typically rushes towards you to start the fight. This is a sign that doesn’t start with the attack but jumps out or prepares to defend. If you don’t know how to defend yourself for a while, you may try performing precise guarding to drive interrupt him and buy you some time to strike before he recovers.

Keep in mind to plan your attacks. After he rushes towards you, start combo strikes by focusing on its abdomen. It will move continuously but make sure to keep moving until you feel like it’ll attack again. To increase his vulnerability and your attack strength, try to maneuver to the side and use Grave Edge to attack him from the flank or back. Get in a few more strikes once he is down before backing off.

You need to be quick with your reflexes and try to look for points where he is getting ready to attack. Try to stay as far as you can once your combo or attack is finished. He may get up and release an electric shockwave that will knock you down if you stay too close for long or just launch the sword attack by bringing it down fast.

Talking about the sword, his sword attack gives you a lot of window to attack. Just jump out of the way and then keep attacking him until the sword is free from the ground.

The easiest may seem like the tackle but it’s not. The swift tackle is sometimes unavoidable. He will do this if you attempt to stay too near to him for an extended amount of time. When he glows with crimson energy, take caution. Too many belly attacks will also make him perform a quick double punch so beware of that too.

Finally, make sure to keep your health in check. Some attacks may cause more damage than you think so keep a handful of healing aids with yourself.

With this last warning of healing, let’s conclude this article. Hopefully, these tips help you with the fight. For more guides, check out the guides section on the site Retrology.

Valkyrie Elysium Trophy Guide and how to unlock all of them