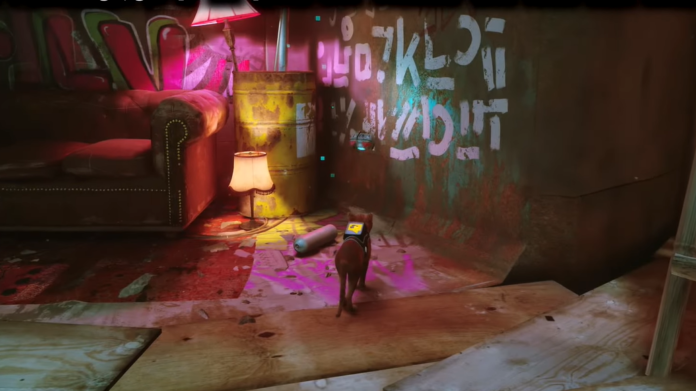 Stray is an adventure and puzzle video game developed by BlueTwelve Studio and published by Annapurna Interactive. The game was released on the 19th of July, 2022 for PC, and PlayStation. In this guide, we’ll cover all Stray B-12 Memory locations.

There are a total of 27 memories for you to find. These Stray B-12 memory locations are also required to get the I Remember! trophy.

The first memory is automatically located while doing Chapter 3’s quest. After you get out of the bucket and walk ahead, B-12 will move to pick up a postcard from the wall.

The next memory can be found in the slum area in Chapter 4. It will be on Guardian’s roof that you can reach by jumping over obstacles on the wall of a slum. The memory will be found on an inactive robot.

The next memory can be obtained by trading 3 energy drinks with Azooz in Chapter 4’s slums.

This memory is also found in Chapter 4’s slums. Go to the bar’s first floor. Right next to the stairs will be a table with a bowl.

Next, this memory is in Chapter 4’s slums too. You’ll have to go to Momo’s apartment by climbing the roofs through the AC vents and then jumping across to the apartment. You can enter the apartment through the window and go to his room. The memory will be on the poster on the left wall.

This memory is near the start of Chapter 4. It will be on this graffiti on the wall which says “RIP Humans<3”.

This memory is on the alley to the left of Guardian on the other side. Climb up through the AC units to the graffiti of a robot.

The next memory is on the top floor of Elliot’s house. For this, go to the alley adjacent to Guardian and then take a left. The first house on the right is Elliot’s. Scratch the door to get it to open. Make your way up the stairs, the memory is the potted plant on top of a plastic chair.

Now, in chapter 5, after crossing the Zurk area, jump on the hanging wooden log. Climb up the roof through the AC unit and go straight ahead until you see an abandoned blinking billboard.

In chapter 5 again, on the construction site, go to the second floor. The memory will be in the form of a banner saying “NECO corporation“.

This memory is included in the Chapter 5 story quest and will be automatically added.

Next, this memory is found in Chapter 7. Take the first left from your starting location and then a right. It will be in the form of this large garage door.

After ending the Zurk chase in Chapter 7, jump on the truck and climb to the area above using the pipes. Once up, go straight till you pass through a metal net, here take a right. The memory will be in the form of an inactive robot lying in front of a wall on your left.

After meeting Doc in Chapter 7, turn right to find the memory on a mannequin with a broom.

Now, in Chapter 8, after Momo holds the door to the tunnel for you, go straight. Then climb up the bridge and take a left. Inside this room, go to the passage on your right and then take a left from the passage. After getting across the strange bubbles, go to the small tunnel on your right. Go straight across the tunnel and climb up the rail right outside.

In Chapter 8, go left from the area with all the eyes sticking from the walls. Enter the passage and go left, then take a right to a tunnel on the wall on the other side of the pipe. You’ll find the memory in an area with a circular area filled with eyes above it.

This memory is automatically obtained while doing Chapter 9’s story.

For this memory, first, speak to Zbaltazar and then make your way down until you see graffiti written in a foreign language on your right.

This is another Memory found while doing the Chapter 10 quest and can not be missed.

For this memory in Chapter 10, go up the first set of escalators and take a right to a room filled with books. This is where you’ll find the memory.

This memory is inside an alley, you’ll have to climb up to a higher level to a place with graffiti on the wall and pillows, and a mattress on the ground.

From the location of the previous one, jump on a bucket and make your way down. Go straight and take the last left and enter the first house on your left through a window. Here, you’ll have to make your way to the small storage area above the room.

Now, from the previous memory, get out of the house and go to the restaurant across the street. Enter the vents in the kitchen of the restaurant to find the memory.

After finishing the factory area, go to the police station with the large hologram on its right. Inside the station, you’ll find the memory in a frame on the wall.

After you finish finding the clues in Clementine’s house, go to the club. Make your way to the elevator on the counter of the club to go to the floor below it. The memory will be on a small table in the middle of the room filled with bottles of alcohol.

In Chapter 11 after you save B-12 and trap the drone in the room, you’ll find the memory on a body on your right after exiting the first gate.

Finally, the last memory is automatically obtained while doing Chapter 12.

That’s all for the Stray B-12 memory locations. Additionally, you may need these energy drink locations to help you throughout the game. For more Stray guides, stay tuned to Retrology.

Guide: How to get the Poncho in Stray

Guide: How To Open Safe in Stray

Guide: Stray All Codes For Safes And Doors