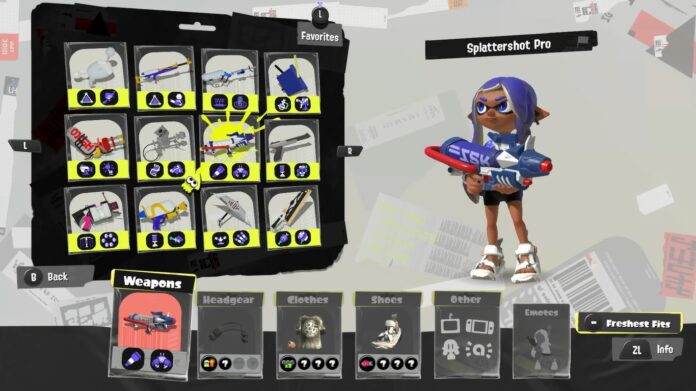 Splatoon 3 weapons come in a variety of shapes and sizes. From Wipers to Chargers, Splatoon 3 has a plethora of ink-dispensing options. There are many categories to choose from and it can sometimes feel overwhelming. To help you choose one that you like according to your playing style, here is a Splatoon 3 Best Weapons Guide.

The Dark Tetra Dualies are the game’s greatest Dualies. Their damage output is lesser than others, but they provide incredibly great mobility and range, allowing you to move around and avoid coming ink while keeping foes at bay. They’re ideal for Inklings who like to get up close and personal.

Dark Tetra Dualies are a newer type of Dualie weapon.

The weapon gives the player outstanding mobility, earning 90 out of 100 points for mobility. In addition, players will have incredible range when using the Dark Tetra Dualies. The damage output isn’t all that impressive. However, it compensates in other aspects, mainly mobility. So if you like light weapons, this is a good option.

The N-ZAP 85 is the main weapon in the Splatoon series, designed by Nintendo’s weapon brand. It is named after the original North American NES Zapper, a Nintendo Entertainment System accessory launched in 1985.

It fires quickly and takes four blows to splat an opponent. It is classified as a major weapon and a member of the shooter weapon class, which quickly elevates it because shooters are very strong in PvP in-game. The weapon’s fire rate is noteworthy, and its range will be good enough. The weapon itself can be used to overwhelm the opponents in front of you, making it an instant solid option for gamers going head to head against other players.

The Octobrush is the next weapon in line. It is classed as a roller-based weapon, and it also falls under the main weapon type rather than being a special weapon. While it lacks range, it compensates for it in the ink flow and handling it provides for players, since both attributes will be quite high.

If you’re utilizing an Octobrush and encounter a charger, your best tactic will be to use its subtlety to your advantage. Unfortunately, when confronted with sloshers, Octobrushes will slip off.

Splatana Wiper is a new weapon. As a man attack weapon, it operates like an ink brush, allowing you to hurl little gobs of ink left and right about you. One of the key benefits that players will have when using the Splatana Wiper is that they will have incredibly high levels of handling points. It does, however, have a feature that allows you to charge the weapon and then spray ink in a very long straight path away from you, allowing you to attack adversaries far away with precision.

As a result, it has a wide and long range. They have a good range as well, although their damage is slightly lower. Also, this weapon has a lot of accuracy which makes your slashes more on point, allowing you to target and attack whenever necessary.

The Splattershot Pro, arguably the best introduction to long-range engagements for novices, is simple to use and produces good results. It is a simple Shooter with the best stats for all-around play. The weapon has good damage potential when sniping targets with high damage.

Unfortunately, it has a slow rate of fire and poor turf coverage. It also suffers from high ink consumption which can be a bad thing. It’s an excellent choice if you want to ink the floor while still taking out foes.

That is all for Splatoon 3 Best Weapons Guide. Let us know if you agree with this list or do think otherwise. Also for more help, check the guides section on our site Retrology.

How to Beat Mr. Grizz in Splatoon 3