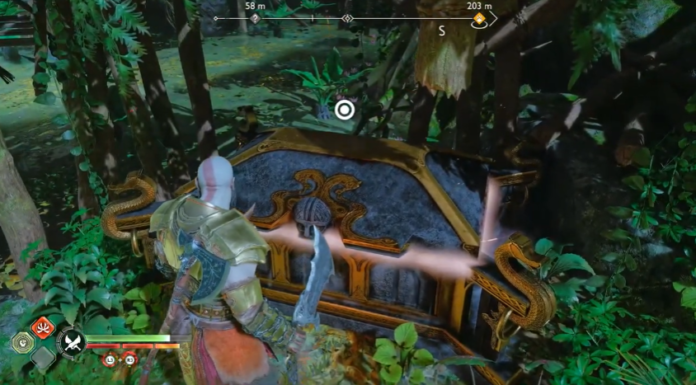 The Nornir Chest of Abandoned Village is located in the northwestern part of the area and can be reached by ascending the village’s northern cliffs.

This Nornir Chest may be discovered near the wooden bridge with the two cranes, one with a grappling point and the other carrying a swinging fire bucket which is used to light Hel’s Bramble.

Each Nornir Chest has a unique riddle comprising three rune symbols that must be solved to unlock it and claim its treasure. This is a torch-lighting rune puzzle, which generally requires you to use your Chaos Blades to light all three torches to unlock the chest.

After that, rotate the crane such that you may cross the bridge using the grappling point. Make a U-Turn to the right on the other side to find the Nornir Chest under the bridge.

The torch of the first Rune is just across from the Nornir Chest and may be reached with the Blades of Chaos. The other two, on the other hand, are not there and must be struck with the crane’s fire bucket later.

Continue back to the bridge and head east to the other side: the second Rune can be seen on the rock wall to the right of the bridge. Grapple across, then turn the crane clockwise once to bring the fire bucket closer to you. Then, with the Blades of Chaos, pull it left to light the torch.

Looking back across the bridge, the third Rune’s torch can be seen between several tree roots to the left. Turn the crane anti-clockwise once more, securing the fire bucket and letting you grapple back over. Pull the fire bucket with the Blades and light the last torch.

Once done, the Nornir Chest will be unlocked!

Enjoy the reward from the Nornir Chest from The Abandoned Village in God of War Ragnarök. Check out God of War Ragnorak Temple of Light Shield Statue Puzzle if you want help in that too.