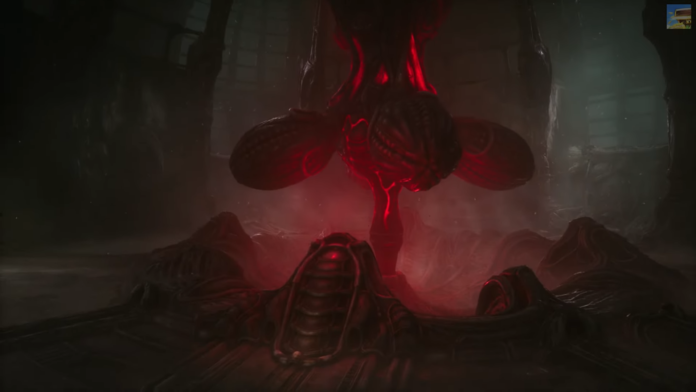 The horror adventure game SCORN requires players to solve a lot of puzzles. Throughout your playthrough, you will come across various puzzles, and Act 2 will finally have the flower puzzle problem.

Players will arrive at a facility in the second Act of the game where they must figure out how to solve the Giant Flower challenge that is in the center of the facility.

One of the more difficult puzzles of Act 1 is opening the Big Gate. If you are struggling with that click here to learn a step-by-step guide on how to get unlock it. We’ll explain how to solve the Giant Flower Puzzle in Scorn in this guide. As well as how players can get the Key Possession Achievement in the game.

That said, now without any delay, let’s begin.

This puzzle can be found in Act 2 in a room with enormous flowers on the floor. You must trigger a mechanism in front of the flowers in order to get them to open.

Simply engage with the opening mechanism to get started. Then, a set of four white dots and four red dots will appear to the right and left, respectively. Fitting all four of the white dots with the red dots is the goal of this puzzle.

We’ll refer to the answer based on the way you should turn the mechanism to make it simpler.

Follow these procedures to place all 4 seeds in the proper positions:

You can complete the Giant Flower Puzzle and proceed to the second act by placing all four seeds in their proper locations in the key by following this pattern.

The flowers will then open up after you’ve finished the floral puzzle. To get rid of an odd-looking flower bud, use the control panel in the center. A human will then emerge from the bloom to the right shortly after that.

The Key Possession accomplishment is then unlocked after the creature drops dead.

That is all for this guide. We hope this solution was helpful for you to solve the Scorn Flower Puzzle. Let us know in the comment section below which guide you want us to cover next. To know about Fixing Scorn low FPS issue, Stuttering and Frame drops or for more guides, keep following Retrology.