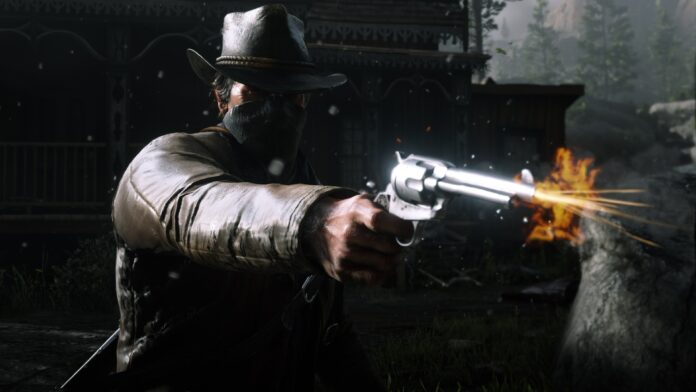 Thus, in this guide, we will be helping you with everything you need to know about Red Dead Redemption 2 Robbery Locations. So without any further delay, let’s start robbing.

“Winner of over 175 Game of the Year Awards and recipient of over 250 perfect scores, RDR2 is the epic tale of outlaw Arthur Morgan and the infamous Van der Linde gang, on the run across America at the dawn of the modern age” – RDR2 as described by the developer.

Before proceeding with any of the Homestead Stash robberies make sure that you are equipped well, always keep an eye on the number of NPCs nearby and plan accordingly. Additionally, make sure that you rob when it’s dark, executing a stealth robbery will be a lot easier than robbing in the middle of the day.

So what you basically will be doing is looking for a stash hidden inside the house and escaping as soon as possible. Here are all the Homestead Stash Robbery locations and how to execute them, good luck.

At this location, you will find a man sitting outside his house or maybe a couple that will greet you and will invite you inside for a drink. Greet them back, however, be very aware this is basically a trap. Make sure that you do not drink whatever they give you because it will make you pass out and they will rob you instead.

However, you can recover and take revenge for what they did to you but if you just want to skip the drama, you can simply kill them right away after greeting them. Then you can easily rob the whole house along with a silver necklace that the woman will be wearing.

At this location, you will encounter a son and a father, and outside the home is a chest that can be looted. After that, you can go on and kill the father and then threaten the son, now the son will give away the location of the stash.

This one is a little time sensitive so be sure to plan accordingly. Additionally, you will also encounter a few enemies before you begin the robbery so watch out for those as well.

Once you’re done with the enemies, make your way to the stash box which is located close to some hay stacks on the upper floor of the barn, up a ladder. You will also find a treasure box with $50 bills and a jewelry bag. You will also find a weapon case in the house along with a Pump Action Shotgun from the bedroom.

At this location, you will be able to locate 4 drunk guys outside the house who will pass out in a while. What you can do is shoot the 3 of them before they pass out and threaten the 1 left to reveal the location of the stash. Now, you can rob the rest of the house as well, and also make sure to take the Double-Action Revolver out of the gun case under the bed.

There are two ways to rob this location, either use your stealthy abilities to sneak from the 2 guys and rob at night, or show up in the middle of the day and take out both of them. Now, Take the cash from their table and be sure to rob everything else useful in the entire house.

As soon as you enter the house, you will encounter an old lady who will ask you to take some stuff from her basement. In that basement, you will be able to get your hands on a semi-auto shotgun, take the shotgun and leave while the old lady shouts at you for robbing her.

Come back to the same house the next day and this time you will encounter the old lady along with her 4 sons ready to kill you. Take down all of them and now get your hands on a lockbox on the kitchen table.

Requirements: Complete the quest ‘A Fork in the Road’ during Chapter 6.

Here you will encounter a woman named Charlotte to whom you will have to teach hunting. Be sure to visit her again after 2 days, and this time you both will be having a shooting competition. Now, as soon as you get an opportunity loot her lockbox along with all other stuff as well.

Robbing trains is undeniably one of the toughest robberies in RDR2, however, one of the most profitable ones as well. Especially the passenger trains since you can loot the passengers as well.

The best way to rob a train is to rob it in a location that is barren and never when it is at the station. Also, be sure to get rid of all the enemies guarding the trains as well as the driver because they can report the robbery afterward which will get you in some serious trouble.

That takes us to the end of Red Dead Redemption 2 Robbery Locations – Part 1 (Homestead Stash and Trains). Let us know the comment section below which guide you want us to cover next. To know about Elden Ring: Caria manor Location, Boss, and more or for more guides, keep following Retrology.