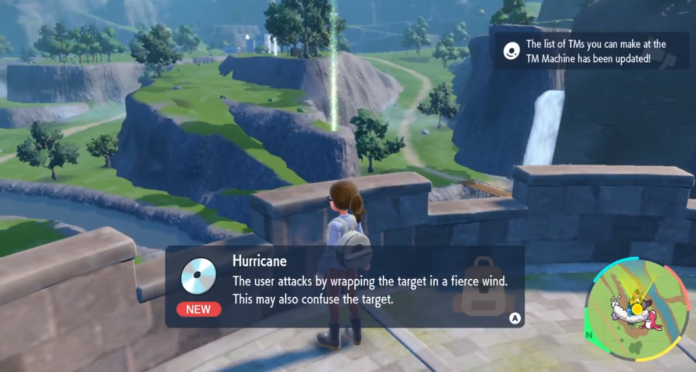 TMs are the most common and easiest way to teach Pokémon new moves, including those they might not be able to learn on their own. They’re a terrific technique to target weaknesses and make your Pokémon more versatile in combat. There are 171 TMs in Pokémon Scarlet and Violet, which are scattered around the Paldea region. Today, we’ll discuss one of the special moves, TM160, and where to find it. This TM is called Hurricane TM and has been part of all pokemon games along with Pokemon Scarlet and Violet.

The hurricane move is defined as the pokemon inflicting damage by enveloping the target in a strong wind. Here is the other related information about this attack.

It has an additional effect that adds to the present power it inflicts. This attack can confuse the opponent with a 30% chance that it can happen for each move. The confusion isn’t absolute but if it is successful, it helps in defeating the opponent. The opponent can hurt itself making your job easier. the confused status effect basically confuses your opponent during the fight, which can cause them to injure themselves.

Now with all the details about the TM160 Hurricane out of the way, let’s get to the location of this useful TM.

There are two locations where the TM160 Hurricane may be found. You can check both locations and see for yourself where the TM spawns in your game. It could be different for Scarlet or Violet players or just a random spawn issue. Nevertheless, we’ll cover both locations here.

This is the first location for the Hurricane TM and it can be found on the second floor of Casseroya Lake Watchtower No.1. You can have access to this area by teleporting to Medali (West). From there, look for a tower it’s high enough to be spotted from afar. Go to the tower and climb two sets of ladders to reach the top. There on top, you’ll find the Hurricane TM. It can be seen in the shape of a glowing yellow Pokeball.

The second location where some have found this TM is the west part of the large northernmost lake in North Province (Area One). It can be found under the tree on the side marked on the map. You may need to go through the lake to get it as the tree blocks the path. Jump in the lake on the middle platform and then to the small space behind the tree.

Once you’ve obtained this TM, you can proceed to a nearby Pokemon Center TM Machine and craft it. The following are some of the materials needed for this:

That’s all for the Hurricane TM from Pokemon Scarlet and Violet. Hopefully this guided you well to the location of this useful TM. For more related guides, check out our site, Retrology.