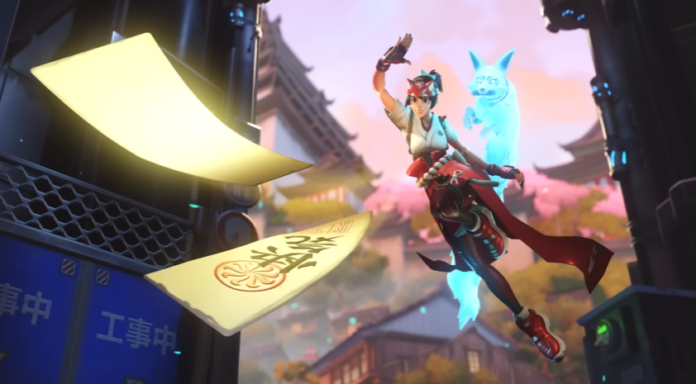 Overwatch 2‘s main features include new modes, a new battle pass, and new characters, including Kiriko, a brand-new healer. Players of the original Overwatch will receive immediate access to Kiriko, while new players will need to play to acquire her. If you are planning to play with her, learn first the basics about her so you know how is she like. Everything you’ll need to know about Overwatch 2 Kiriko is in this Guide; from abilities to her ultimate and tips to help you understand her play style.

Kiriko can use Swift Step to teleport to her teammates. It has a wide range and can even transport you through walls. When casting Swift Step, you may be attacked, so take shelter before traveling to your companions. It’s also vital to know that after utilizing Swift Step, you’re temporarily invincible.

Kiriko’s protecting charm not only makes her companions invulnerable for a short time, but it also cleanses them of any harmful effects. This ability heals friends in the area for 50 seconds and has a rest time of 14 seconds, allowing you to use it repeatedly in combat. It’s critical to keep an eye on your opponent’s ultimate charge since a well-timed Defense could win the game for your team.

The Protection Suzu can heal the following:

Kiriko’s primary support function is the Healing Ofuda, which is a powerful healing skill. When activating the ability, Kiriko launches two Ofuda at a time and has ten before needing to recharge, allowing you to use healing five times in a single turn.

When it comes to mending teammates, you don’t have to have pinpoint accuracy when sending out Ofudas. Once you’ve locked onto your comrades’ blue outline, use the talismans to heal them. Talismans heal your teammates for 23 health points in two-second spurts.

Kiriko’s secondary fire, Kunai, gives her more of an attack approach and gives her the capacity to kill. The Kunai can be superb in the hands of a good player, but it can also be disappointing if you lack the necessary mechanical proficiency.

This ability can hit for increased critical damage, which means that if you’re accurate, you could compete for kills with other DPS heroes. If you can’t strike heads, it deals mediocre body shot damage, so you might be better off repairing it.

Kiriko has the ability to climb up surfaces for a brief time, giving her access to new regions and new strategies that other heroes are simply unable to use. This also makes her able to analyze her team and stay with them over a large distance by keeping eye on them from a height.

The Wall Climb passive is extremely effective as it also allows you to gain high ground for improved fire angles and stay up with mobile heroes like Winston, Genji, and Hanzo so you can heal them when they need it.

The fox spirit that Kiriko summons as part of her ultimate ability produces an AoE that speeds up teammates’ movement, attack speed, and cooldowns as they follow in its wake. A straight metaphysical path forms in front of Kiriko as she casts the Kitsune Rush (that can go up and down surfaces). Her spiritual fox runs down it, and there are Torii arches to identify it. Everyone on your team gains movement speed, attack speed, reload speed, and cooldown reduction when you and your team are on this path.

This skill is really helpful in most scenarios but it’s also a little strange in certain ways. You are largely constrained within the area of the ultimate and can only move in a straight line. This makes the area for this ability to work small and confined.

That’s all we have for Overwatch 2 Kiriko Guide. Hopefully, these tips and information help you understand her character. If she is not the up to your liking, you can choose Moira or Junker Queen and see if they are to your taste.

Overwatch 2: Guide to Unlock all Heroes