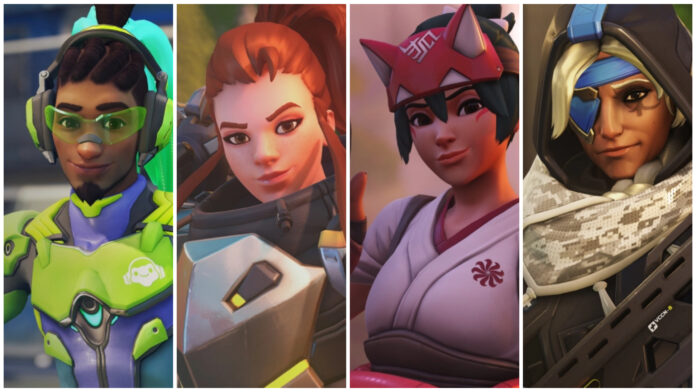 In any team-based game like Overwatch 2, having a correct balance of different types of people is always the best way to start. Support characters are one of the categories of which you should have at least one on your team. Here are four Overwatch 2 support characters that, in our opinion, are best to play according to their abilities, difficulty, and overall gameplay.

Even though Brigitte lost the ability to kill two birds with one stone aka stun the opponents while blocking in Shield Bash, she is still a good character if you need shield support. She’s fantastic at pushing enemy flankers away with her shield and whip shot. She can also act as a Tank so even if she is not chosen as support, you can use her as a tank.

If you can use her rocket flail skillfully, she can heal a lot of nearby teammates, but she can also rush in to aid in a push and deal a lot of close-range damage as well. Despite losing its ability to stun targets, Her Shield Bash is probably much better in Overwatch 2 because it now instantly activates Inspire, causes far more damage, and can break through other shields.

She does fall a bit low on ranking the reason that in some scenarios, she may need good companion support. One of the best ones is Ana as she can target long-ranged opponents while Brigitte can push close-ranged ones away.

Understandably, Kiriko is now fairly popular given that she is the newest addition to the game. But this fame isn’t just due to her being new; she is also a well-balanced character. She can deliver a respectable amount of damage because her skills are similar to Ana’s, giving her an excellent balance of offense and defense.

Her Healing skills are helpful as they have a low cooldown and paired with her teleport, she can reach the required place to heal her teammates fast. Her wall climb and teleport both make her incredibly fast. Kiriko’s Kitsune Rush also benefits allies, albeit it can enhance the entire team rather than just one.

With the release of Overwatch 2, he didn’t see many modifications and stayed a mainstay hero.
With new maps becoming available, Lucio’s ability to speed up and his powerful healing skills are quite valuable. Lucio can make the most of his passive Wall Climb ability and speed boosts. Mobility is essential for support heroes, and Lucio is a speed demon. His speed and healing can make him hard to handle but once you get the hang of it, you can use both simultaneously to your advantage.

His ultimate equips all nearby teammates with a massive shield. This is excellent on both the offensive and defensive sides because it can help your team before a big battle or keep them alive in the face of the other team’s devastating ultimates.

Lucio was previously quick to flee danger, but thanks to the new support heroes’ passive ability, he’s a persistent presence on the battlefield. Lucio is a fantastic choice if you’re playing solo because he is also significantly more adaptable than some of the other supports.

Even though Ana is one of the more experienced heroes in Overwatch 2, she is unquestionably one of the strongest, particularly in the support class. She is in a better position than some of the other healers in the game who need to be close by because of her long-range ability to do damage or heal teammates.

Depending on whether you shot an ally or an enemy, their sniper either heals or deals damage over time to those it impacts. This calls for accurate shooting on your part, but the results are impressive if you can hit repeatedly. A sleep dart can be added as a close- or medium-range backup to knock out allies. Ana’s Biotic Grenade, which can also stop enemy healing, can also create area-of-effect healing in addition to targeted healing. Last but not least, Ana has the ability to aid in advancing a charge with a shot that can enhance an ally’s damage, making it simpler for attackers to succeed.

Ana has simply always been among the best in the list of Overwatch 2 support characters she excels in every situation. Because of this, she excels not only as a supporting but also as a solo character.

Along with Kiriko, there have been two new additions to Overwatch 2, Moira and Junker Queen. Do check them out if you want to know about the new additions.