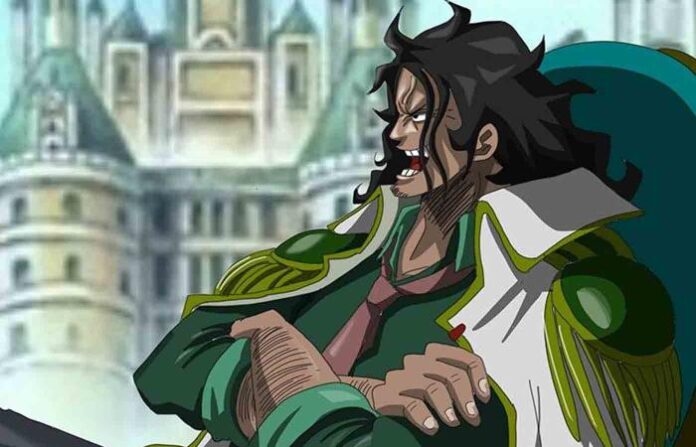 Since the latest chapter, 1053, of One piece manga dropped, there has been a new uproar about a new addition to the fandom’s characters. This character is Marine Admiral Ryokugyu also known as Green Bull which is assumed to be due to his powers. His real name is Aramaki but he uses the other name for his Admiral persona. As the story progresses. we may get on explaination of why ha has an alias but as for now, we have nothing.

Here is the first look of Admiral Ryokugyu in the manga in chapter 1053.

In the anime, we first get to see him in the shadow, as anime like to do with mysterious or overly powerful characters. We know that the Admirals are the Marines’ most formidable fighters. And already knowing how powerful the last three Marine Admirals were, Admiral Ryokugyu is expected to be top tier. Also, the most powerful one is always the last to arrive so he is kind of chad as people are anticipating him to be.

This type of appearance mainly tells us that something is interesting to be expected in the following chapters/episodes. Not much can be said about the future though but we do hope for the best.

About the appearance of Admiral Ryokugyu, he is shown to be muscular with a quite tall height. His height is not confirmed but he looks to be almost similar in height to 2.78 meters of Fujitora. He has shoulder length black hair. He is also shirtless with a pronounced kanji tattoo (死川心中 shi kawa shinjū, meaning “double suicide at death river”) going all the way from his collarbone across his chest.

His accessories include a cigarette, sunglasses and sometimes the Marine cloak.

Lets take a look at the theory that, like other characters of Eiichiro Oda this character is also based on a real life character. this time, its the actor named Yoshio Harada.

For more details, this twitter user presented the analysis on this new sensational character.

Admiral Ryokugyu’s rank in power and strategy is as well as others. His rank is nearly on top which allows him to play his strategies in action by controlling fleets and command people under him. He also has a say in top plans making him one of the main person in Marines. With the sense of authority he possesses, it is clear that he has been very successful in his plans. Thus being confident in his orders for every type of situation.

In combat fighting, he is ranked as one of the best combat fighters in the One piece universe. He was not in the picture but was talked about by others, remarking on being one of the best. Also physically, he is always shown to be strong. We don’t see much of him so this is the real introduction of Admiral Ryokugyu. We will hopefully learn more about how he remains fit and calm in every fight.

Similar to other admirals, Ryokugyu also have eaten a devil fruit but it is not yet known of what kind. This enables him to:

Here is an image showing Ryokugyu using his power and generating his fingers as plants.

What is the goal of Admiral Ryokugyu?

It is obvious that his goal may be around defeating the pirates and their acquaintance but so far, not much is known as to what goal he has. Like every other person, he is also passionate about his work and wants to destroy his enemies. It is also accounted that he goes to huge lengths just to eliminate the pirates he greatly despises by using his beat power or just control which he is also quite trained at.

Being everyone’s favourite comes with a price and that is will this character fall completely on the expectations of his fans? We can only wait and watch.

Meanwhile take a look at this fun take on What Admirals In One Piece Would Look Like In Real Life.