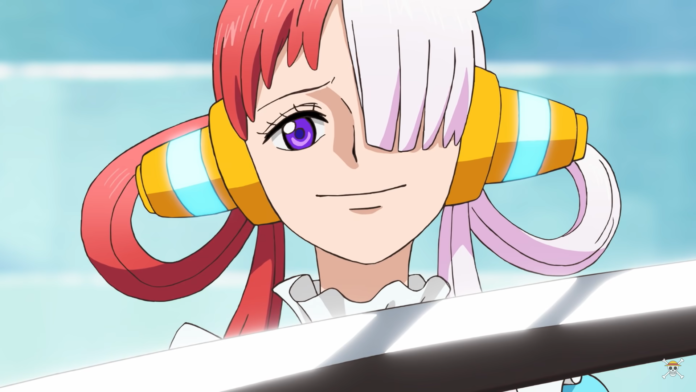 One Piece: Film Red, produced by Toei Animation, is scheduled to come out on 6th August 2022. The movie has received much attention because of its title, hinting that it will finally give Shanks the spotlight he deserves. One Piece fans have been waiting for 25 years for him to make his move and finally, they’re getting an entire movie on it. The trailer dropped on April 13th and it has dazzled One Piece fans all around the globe. Let’s look at the Film Red trailer breakdown below.

The biggest shock comes at the start of the movie as it is revealed that the main character of the movie, Uta, is actually Shanks’ daughter. The trailer begins with Shanks saying, ‘you’ll always be my daughter’ and at a later scene, we see young Uta crying and begging Shanks to stay as he is leaving. Finally, we get a shot of the older Uta, where she’s seen wearing these big yellow headphones and a sword can be seen in front of her. Theories suggest that this is actually an execution scene because she does seem to be the one holding the sword.

We finally see Luffy in his new outfit for the movie. He’s running and screaming Uta’s name as he pulls his giant Gear 3rd arm behind him. It can be assumed that he’s about to attack someone and it could potentially be to save Uta from a dire predicament. We see him running on what seems like water but in a crystallised state. Crystals might be a big part of the island’s geography as we’ll see in a later shot.

Here we have a vast shot of the island and as you can see, there are giant, beautiful crystal structures throughout the island and big cylindrical mountains in the background. We can see Luffy and Uta standing together in the foreground. Music seems to be a big part of this movie because the trailer introduces Uta as the world’s greatest diva. It might be speculated that Uta might have some powers related to sound or music.

In the trailer, we see Bartolomeo, Bepo and Law and we see Barto and Bepo wearing outfits to show their support for Uta. We also see Coby, Helmeppo Akainu, signifying the Marine’s involvement in the movie as well. We see Akainu crushing his cigar in rage. Finally, we see this very strange looking character who is obviously giving us a villainous impression. It’s yet to be seen who this mysterious character is. What’s interesting to note is that not a single Straw Hat was shown in the trailer.

Towards the end of the trailer, we hear Luffy saying, “Shanks won’t keep quiet”, which might be hinting at something Uta did or will do in the movie and Luffy won’t let that happen. We can see Uta crying for a second time as musical notes quickly fill the screen and the title of the movie emerges.

That’s all for the One Piece: Film Red trailer breakdown. If you’re interested in fan art, we have some amazing Luffy Gear 5 fan art for you. For more anime and manga news, keep following Retrology.