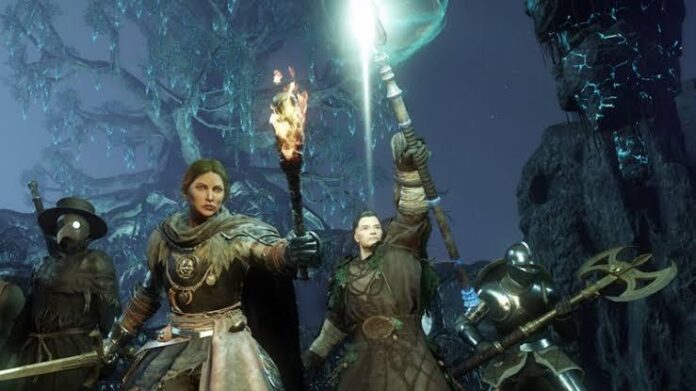 New World is a thrilling, action-packed, open-world MMO that provides its players with the exhilarating opportunity to explore and make their own destiny on the supernatural island of Aeternum.

The game includes a lot of items, characters, and weapons for you to work with. Life staff is one of the novel weapons to own as it allows you to build any character to be a healer.

Healers play an essential role in the quest line. The Life Staff, with its healing abilities, is the foundation of several character builds that include combination classes along with more focused healing builds.

In this guide, we will let you know all about the New World life staff build.

How to Acquire a Life Staff

There are many ways to get your hands on a life staff:

Players can craft their own life staff by gathering simple resources like iron, wood, and a few life motes and putting them together.

After you defeat your enemies, they will occasionally drop weapons along with some other ruins so depending on how many enemies a player kills between the shipwreck and the first settlement, it’s possible to equip a life staff very early in the game.

After you complete a quest, you will earn a chest as a reward. These chests contain random objects that could include weapons.

It is the only weapon that scales with Focus at all. This was ideal for those building a healer, but it made diversity in the class slightly more difficult. It also limited some of the options available for single PvE play.

Mending Touch: a very good option, its use does tend to be limited as you need to line up the heavy attacks to hit as debuffs are applied, however, it can be and often is needed.

Desperate Speed: can trigger on a very very regular basis, effectively adding a huge amount of throughput as long as you are keeping active.

Revitalize: an amazing kill one should never go without. However, it works only with light attacks.

Bend Light: real strength is in Medium/Heavy armor as the dodge animation is a lot faster, whereas the light dodge takes quite some time to fully complete.

Defensive Light: additional mana is rarely needed, blocking is often awkward and not something you end up doing too often, and as such getting value from this is very tough.

Protector’s Touch: very good if you are expecting to take regular damage and allows you to frontline really well.

Balance: handy to have in your back pocket if you are worried about people chasing you or generally getting on top of you and causing chaos.

Glowing Focus: allowing a really high uptime on effects like fortify and recovery.

Void Gauntlet:  an option for those specializing in healing, looking for a ranged and magical DPS option. It also scales with Focus along with Intelligence.

Bow: a good choice for healers who are also hunters and survivalists as this ranged DPS weapon doesn’t rely on mana and only uses one Attribute.

Warhammer: those who are considering a Paladin or Shaman build with some melee DPS clout can put a few attribute points in Strength and pick up a warhammer.

Ice Gauntlet: scales only with Intelligence. The only other magical weapon in the New World armor that scales with only one Attribute point.

This was all about the New World life staff build. For more guides, keep following Retrology.