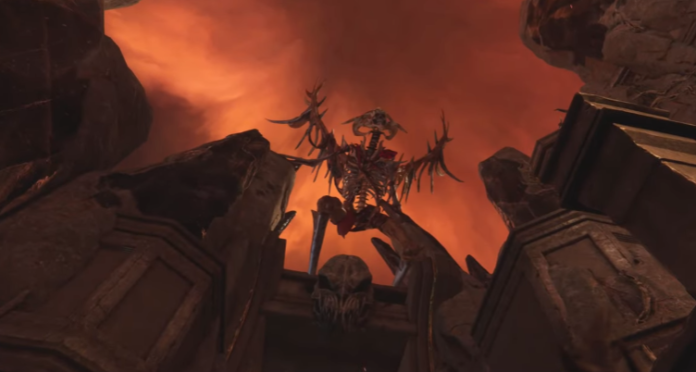 After completing the whole game and going through all the struggles to the end, you’ll have to encounter a final boss to end the game completely. It’s not going to be easy as this is the last boss so let’s get into this guide for Metal: Hellsinger Worldbreaker Sheol Boss.

While she hits you, concentrate on avoiding and keeping your reflexes in check. If you suffer damage, try not to crack open a crystal right away because you need to conserve them for later. Prefer to heal in the second and third phases.

She will become exhausted after a short period of time. Use that time to allow a strong weapon to fire a huge shot aimed perfectly at her ribcage. This attack with the starting shots will easily make her lose one-third of her life.

The Red Judge will now move to the left side of the mountain, and the second half of the arena will be unlocked. Begin climbing the cliff to the top platform right away.

After surviving this phase, she will become fatigued and collapse on the platform, leaving her vulnerable to attack. Next will be the final and third phases of the attack.

The Red Judge will be dormant for a brief while after plummeting to the lower land. In a desperate attempt to stop you, the Red Judge will summon her last troops. Four waves of opponents will attack you, each of which will include all of the elites at some point. To gain as much health as possible, try to prime every beast for slaughter.

This is the most straightforward phase. She will push you against the back wall and compel you to crawl forward. Orbs will begin to fly about your feet but it’s nothing you haven’t seen before. Simply leap over them to dodge them while sending the last few bolts into the Worldbreaker’s eyes.

Once her left eye is destroyed, she will die soon. You’ll get a final cutscene after the final death so do listen to her to complete the story.

That is all for Metal: Hellsinger Worldbreaker Sheol boss Guide. Also for more help, check the guides section on our site Retrology.