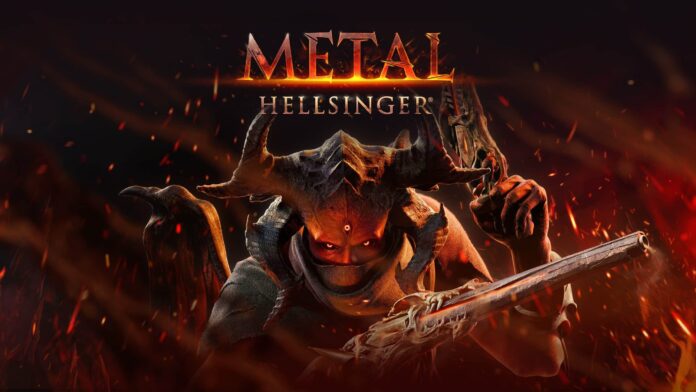 Metal: Hellsinger‘s weapons are intricately crafted, incredibly aesthetical things that go well with the whole concept; from usage to look. Some are default, which means you can use them right away while some need to be unlocked. With such a diverse and intriguing selection of weaponry available, let’s take a look at the Metal: Hellsinger Best Weapons to consider.

The Hounds – Cerberus and Orthrus

Is there a weapon with essentially integrated aim assistance that works at both close and long range, does a lot of damage, and has more than enough ammo to last a long time in combat? Yes, there is, and it is known as The Hounds which is undeniably one of the Metal: Hellsinger Best Weapons

These dual revolvers provide decent damage, the maximum fire rate in the game, a reasonable reload time and a big crosshair for accuracy. Their in-game description warns that they are “less effective at very long distances,” although none of the stages are built in such a way that this is a persistent problem. This one will become your favorite if you master the reload timing.

These dual revolvers provide decent damage, the maximum fire rate in the game, a reasonable reload time, and a big crosshair for accuracy. Their in-game description warns that they are “less effective at very long distances,” although none of the stages are built in such a way that this is a persistent problem.

Persephone has an excellent feel, good damage, and a great ultimate. Like any good shotgun, it shoots a cluster of shots with a much wider dispersion than single bullet weaponry like The Hounds. Persephone’s shots, which are timed to music, can eliminate numerous foes at once, which is beneficial when things get busy and you need some breathing space.

Persephone has one of the highest ammo capacities in the game. Paired with the fact that its ultimate can wipe out everyone, even elites with a giant arena-engulfing shot. Reloading this gun is sluggish with a limited range which is the biggest disadvantage of Persephone. If it’s combined with something that can pick out distant adversaries like The Hounds, you’re prepared for anything.

The Vulcan, an angelic heavy crossbow reputed to have been plucked from the skies. It fires bolts that burst on impact which deals significant harm to any monster stupid enough to cross its path. The Vulcan is unrivaled in terms of instruments for dispatching hordes of careening foes before they get up close and personal. It also has a massive range and is forgiving when it comes to correctly lining up your crosshair.
The Vulcan’s low ammo capacity, which necessitates a reload after every two bullets fired, is the most significant disadvantage to offset these advantages. It also features one of the worst ultimate abilities in the game, as it takes a long time to activate.

Paz – The Pulse of the Universe

One of the best long-range weapons is Paz. It doesn’t deliver much damage and has a lackluster ultimate – a bolt of light strikes down, dealing minimal damage and maybe spreading to nearby targets. This is intentional, as Paz is mostly used to prepare an adversary for a Slaughter, providing you health and killing the foe.

Paz has a considerably more vital use: firing Paz, even at nothing, will keep your Fury combination active. It is extremely helpful since, unlike the rest of your armament, Paz does not need to be reloaded. Along with that, this allows you to continue swaying to the music between kills, allowing you to quickly ease into the calming rhythm of shooting as you confront your next horde.

Terminus is a sword made from an archdevil’s scythe and studded with skulls. It’s not horrible, but the problem is that it’s a melee weapon among a sea of superior weapons and projectile-slinging alternatives. The short-range can oftentimes put you at risk so that’s where it falls off.

Terminus’ damage is great enough to make this defect less noticeable, but it truly shines in its ultimate ability. When this ultimate ability is combined with the fact that the ultimate is one of the quickest to obtain. Also that it can be saved for later use by switching weapons, Terminus has the potential to be a highly strong weapon.

This is the list for Metal: Hellsinger Best Weapons. Keep in mind this is just our opinion and you can think otherwise. After you’ve chosen the weapon of your choice, you can learn how to defeat the final boss of this game here.