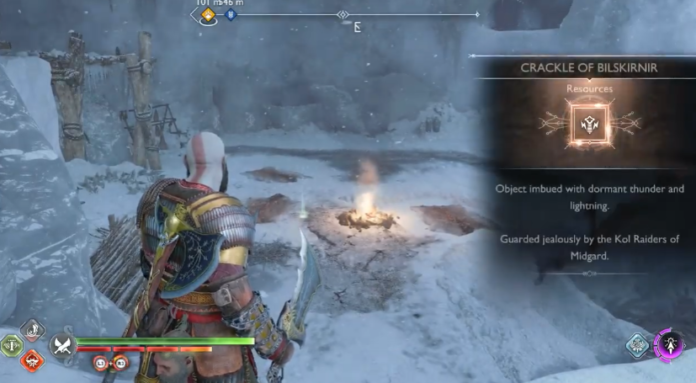 God of War Ragnarok has many items which can be converted into relics by being taken to a blacksmith. Some of these items can be found easily while some need you to defeat a boss or complete quests. One of these items is Crackle of Bilskirnir which requires you to complete a quest and defeat a mini-boss in the process to get it. Here is a complete guide on how to get your hands on Crackle of Bilskirnir in God of War Ragnarok.

To start the side quest, travel to the land of Midgard, which is accessible after completing halfway through the main storyline and stages of God of War Ragnarok. In Midgard, Travel to the lower area of the Lake of Nine. As you arrive in Midgard, you have to head to a Kol Raider camp to begin the mission called animal instincts. This quest will take you to three more Kol Raider camps that you must clear out.

The quest will take you to three more Kol Raider camps that you must clear out. You’ll face Kol raiders, whom you’ve already fought and defeated several times by this stage in the game. This is the longest phase, but it is also the simplest. Given where you are in terms of growth by the time you arrive at the assignment, none of the enemies here should represent much of a problem.

Players frequently miss the Kol Raider Camps since they are not particularly essential locations. There is almost no information about this area so you’ll need to search every inch of Midgard and see for yourself.

When you get to the fourth one, a boss will appear, and you’ll have to defeat them to get the item. Oluf Nautson is a Kol Raider Chieftain with a big stature that can be scary. There’s no need to be concerned about it because he’s easily defeated.

The attacks of Oluf Nautson are slow but heavy and can do a lot of damage if not dodged. The best thing you can do is to keep your distance and then attack with a good attack to take down his health a lot in a single blow. Keep an eye out for his unblockable attacks. These look like a front blow and ground slam and they can put you in a critical position. Also, when he starts a drinking animation, he will have a blue ring for a few seconds, signaling that you can use your shield to counter him.

If you don’t want to utilize your shield to block his assaults, you can take him down with rapid attacks combined with heavy ones in the end. Keep him occupied with hard attacks, and when he stops, switch to a more powerful attack. Both ways are viable and entirely successful. You can choose any and easily defeat him in minutes.

And that’s all that you need to know about getting Crackle of Bilskirnir in God of War Ragnarok. For more related guides, check out the guides section.