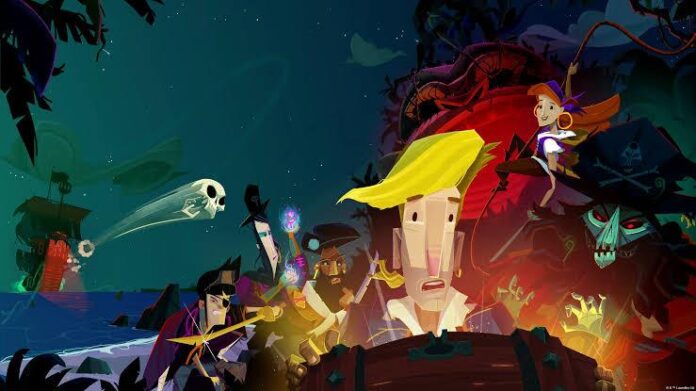 Return to Monkey Island has been a huge buzz since its release on 19th September 2022 as it is not only a return for the series but also for the fact that Ron Gilbert, the series creator, quit after “Monkey Island 2: LeChuck’s Revenge” in 1991.
This new version upholds the same delightfulness of the game. Some may argue that it was unable to meet the high expectations set for it but overall it seems like it’s doing well. This is a guide about Return to Monkey Island LeChuck’s secrets where we will help you unveil all of LeChuck’s secret items.

A wild twist awaits you if you have stolen LeChuck’s map and attempted to use it to reach the secret of Monkey Island. This is where you will learn that the map you have been following all along is in fact a fake one!

The real one was taken by Captain Madison and other pirates before LeChuck could have gotten the chance. However, they have been unable to do anything with it because of its advanced encryption.

The pirate leaders will only be able to unleash the maps’ secrets if they have the following three requirements:

As Guybrush can still get on board LeChuck’s ship, the three leaders agree to share the secret with him if only he helps them get his personal information.

The foremost task at hand is to board LeChuck’s ship. How do you do that? Head over to the Volcano Beach region and down into the water. Keep walking and to your left, you will come across a ship’s anchor. Now, climb it to get to the side of the ship.

From here, head left again and climbed up a ladder to your right. This will lead you to the ship’s rudder. Here, you will find Flair waiting for you and she will not be too swell to see Guybrush. As it turns out, he is no longer welcome on the ship and must be thrown overboard.

After you encounter this sticky situation, head over to the three leaders at the large monkey head and explain the situation. Lila will offer a solution to disguise Guybrush, but she will require a deeply personal item from one of LeChuck’s crew members. This is when you will hand her Gullet’s book of poems.

By reading the poems, they will be able to make Guybrush look like Gullet so he can board the ship with no more hurdles.

Make your way back to the ship. After a short conversation with Flair, she will leave to carry on with some work. This is when you can have a quick chat with Apple Bob, who will tell you that LeChuck recently commissioned Flair to compose a theme song for him.

However, she will refuse to hand the song over just like that, but if you ring the bell once to call for another vote, she will leave you to go downstairs and collect the Sheet Music from on top of the barrel outside the entrance to the kitchen.

The stolen sheet music will unveil LeChuck’s theme song which is Do, Do, Mi, Sol, Fa, Fa, Re.

If you are already below the deck, do pay a visit to LeChuck’s cabin. Here, on a shelf to their right, you will be able to recover LeChuck’s Diary. A lot of the pages might contain unwanted blabber but surfing through will reveal an entry for February 17. This will unveil LeChuck’s catchphrase “Brandish the seven bilges!”

Head back up to the deck to get your hands on the final item on the list. This will get crew members busy so you can sneak down to the kitchen and speak with Putra. She will be very disinterested at first but calling her Chef might do the trick. She will reveal that LeChuck’s favorite food is Tentacles with daisy sauce.

This is your cue to return to Volcano beach and use the knife with the dead squid to get the tentacles. Bring back the tentacles to Putra who will cook them for you.

This marks the end of the task. We hope this Return to Monkey Island LeChuck’s Secrets guide was helpful to you. For more gaming guides, keep following Retrology.