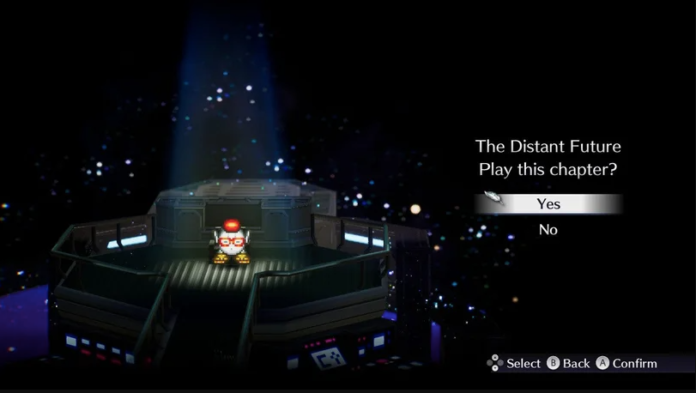 Cube’s Distant Future chapter is a graphic novel, which takes place on a spaceship carrying an extraterrestrial creature and a mysterious saboteur who has it out for the crew. It’s undoubtedly the most narratively dense chapter in Live A Live and features a ton of entertaining sci-fi film homages.
In this guide, we will be helping you to find Kirk’s body in Live A Live. So let’s being.

How to find Kirk’s body Live A Live

Exit the elevator and enter through the door next to Cube’s south side. You’ll walk through a tunnel. Up till the fork in the road, follow it. When you reach the doors to the north and south of Cube, take either side and follow the path around. Navigate to the north door. You can find Kato there. Decimus, the main AI of the ship, will be introduced to you by him.

Kato will lead you outside following the meeting and ask if you want to accompany him to the cargo hold. Decline for right now. Instead, enter the elevator again through the door to the northwest. The Bridge is located there. Speak with Rachel. She is positioned in front of a panel. She will call for the rest of the crew once she realizes there is a problem with the antenna.

Speak to all of them. They will all decide to leave the spacecraft and examine the antenna. Once they’re gone, take the elevator down to level 1.

When you arrive, enter the Cargo Hold through the south door. Let’s take a closer look at the enigmatic “Behemoth” the team is transporting before we go check on the crew. You can find it to your right as you move across the area. To see what’s inside the enclosure once you enter it, click on the panel in front of the glass and choose “visual log.” Once you’re finished in here, go out the door.

Return to the Level 1 elevator and scan the area northwest of it for a door. As you enter, you’ll see Huey and Iris fighting while Kato frantically tries to break up their fight. Cube will wedge himself between the two crew members and be yanked out of the way with force.

Kirk and Kato will wear space suits and exit through the airlock once the battle is over. Once they are out of the airlock, Cube will automatically depart with Huey. As soon as we regain control, take the elevator back up to level 3 and enter the Bridge, where we previously spoke with Rachel. Once inside, approach Huey who is in the back of the space.

The two will speak with Kato and Kirk through Huey. The mission will go according to schedule up until Kirk’s suit breaks down. Both Huey and Rachel will run to the medical bay. Go back to level 2 in the elevator. When you get there, get out of the elevator and walk into the tunnel on the right.

Continue south in the tunnel, passing the first platform before coming out on the next one. Go through the south entrance once you are on the platform. We’ll observe the team tending to Kirk inside. Watch what happens, then use the decontamination chamber on your left to descend into the surgical room. Go talk to Corporal Darthe once you are in the surgery room. Huey will disagree with him after he attributes Kirk’s demise to a malfunctioning life support system.

The sound of an explosion will be audible as the two start to talk about the incident. Darthe, Huey, and Kato will depart from Med Bay. As soon as you speak to Rachel, she will take Kirk’s helmet and exit the room. Observe her. We’ll need to use the elevator to get to level 3 so we can reach the Bridge.

Talk to Kato. He is making use of the left panel. He will realize that the antenna caused the explosion. Next, we’ll jump to the recreation area. Go to the coffee maker and make Huey a coffee after hearing Darthe whine. The captain will call the team after you give him the coffee. After a short discussion, everyone will disperse.

How to Get the Memory Card

Once you’ve regained composure, enter the recreation room through the south door. Right after entering the tunnel, head south until you come to a platform on the left. Access the console on the upper left-hand side of the door by stepping onto the platform. It will request your name. Enter “Cube” or the nick name you gave him when you first met him in the chapter.

You’ll be able to enter the space. Inside Darthe and Kato are rummaging through Kirk’s belongings. Speak with Kato. He’ll recall that Kirk always cherished the term “Warp Speed.” Enter the word into the computer that is located to Kirk’s left of his bed. it will say when it is opened “Note to self: stow it at the foot of the bed,”. Find a Memory Card by going to Kirk’s bed’s foot.

You can now return to the recreation room and engage in some arcade gaming in the space’s lower left-hand corner. You can formally save the game with this Memory Card while retaining your progress. Although there is no reward for playing the game, it is worthwhile to practice if you’re interested in learning Cube’s fighting style.

Take the northern elevator to Floor 1 and proceed to the Airlock when you’re ready. Speak with Huey when you arrive. He will consider Kirk’s passing. When you’ve finished talking, go outside.

Return to Level 2, then go into the Sick Bay. This room is where Kirk passed away earlier in the chapter. However, as we enter the space, we discover Kirk is not there. Head to Kirk’s room after leaving the Sick Bay. We discovered the Memory Card here, however, if you haven’t finished that stage, you should enter the tunnel next to the Sick Bay, travel south, turn about in the tunnel, and exit on the first platform on the left. It is the room located in the platform’s upper left corner.

Tell Kato about Kirk when you see him. Go back there since he’ll run to the Sick Bay. When you get there, Cube will automatically join the other people who are trying to figure out where the body might have gone. The scene will then shift to Rachel’s room where she will tend to Kirk’s body that is laying in her bed. She will be cornered by the group and declare that Huey killed Kirk.

Then a broadcast will arrive on her PC. There is what appears to be a message from Kirk asking Rachel to exit the airlock and find him. She’ll flee the space. Proceed through the door northwest of the elevator to return to Level 1. Inside, Rachel will be being held back from the Airlock by Kato, Huey, and Darthe. We have no other options, so get out of the Airlock.

We’ll hear a high-pitched shriek from the cargo hold as we proceed. Proceed into the Behemoth’s enclosure on the right-hand side of the Cargo Hold. The Behemoth is no longer being held captive when the enclosure’s control panel is accessed.

That is all for the guide on how to find Kirk’s body Live A Live. Want to know every detail about the Lile a Live Remake? Live A Live Remake Is Out And Is Getting Great Reviews! so do check it out.