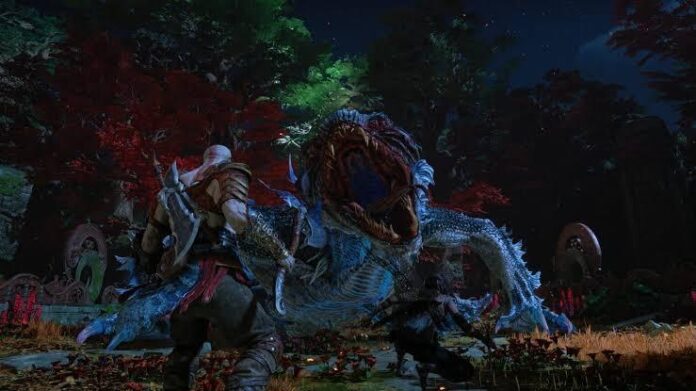 In God of War Ragnarok, you will come head to head with a series of fearsome and difficult bosses. Nidhogg is the protector of the World Tree and a very tricky boss to fight.

Kratos and Freya make their way through Vanaheim to eventually reach Freya’s childhood home, where Odin has placed a seal that keeps her physical form bound to Midgard. To free herself, Freya has to destroy the seal. However, as she is just about to approach it, a terrifying creature appears from Realm Tear, the Nidhogg.

When you first fight Nidhogg, half of its body will be reaching out of a realm tear. You will have to be aware at all times as it has 10 health bars and throws melee attacks that can drain you. The trick to avoiding damage is to stay as close as you can to it and throw swinging attacks.

It will also try its best to hit Kratos by attacking him with its swinging hands. Simply roll out of the way using circle to dodge or just press L1 to block. Once you manage to get the grey stagger bar full, you’ll be able to grab Nidhogg and pull it out of the realm tear by pressing R3. This will lead you to Phase 2.

As Nidhogg is out now, it has the advantage of using its tail to try and deal a big AoE attack. To keep it from attacking, run up and break its tail using L1 twice. This gives you a chance to attack it.

Now make sure to avoid the bifrost stomp and the purple area sticking out. Roll out of the way if you see the red circle sign on Nidhogg’s hands. Launch as many attacks as you can and drain its health bar. Once you’ve managed to deplete four health bars, you will enter another scene where Freya will return to her human form and will be free to help Kratos take down the Nidhogg.

As the phases progress, Nidhogg gets more aggressive. Now it will wrap itself around a pillar and start throwing many attacks together. To evade these, you can either roll out of the way or just roll through them finding the right time. After you have successfully dodged her initial attacks, throw in some of yours.

Another trick up its sleeve is to get down from the pillar only to suck in all the debris and to throw it like a projectile at you. So when the red circle sign pops up around her mouth, make sure to get out of her way. Land in some attacks before it goes back up.

This time, Nidhogg will climb even further up the pillar so you will need Freya to shoot her with her Sigil arrows by pressing square. Once you’ve shot those, throw an axe using L2 + R1 to bring it down. Attack as soon as it reaches the ground and drains its health to half. She will keep trying to hit you even by adding realm tear melee attacks and bifrost attacks. Dodge while you can and some of the bifrost attacks can hit it back.

As it is down to three health bars now, Nidhogg will try its best to get back at you by using a new blast attack from the mouth which you will have to be really quick to dodge.

Once you get it to its last health bar, press R3 to cue a change of scene where you will have to shoot a sigil arrow when it activates the vortex. Throw in the final attack with an axe and defeat her altogether.

This was all about how to defeat Nidhogg in God of War Ragnarok. For more guides, keep following Retrology.