Cult of the Lamb Leshy Boss Guide (How to beat) 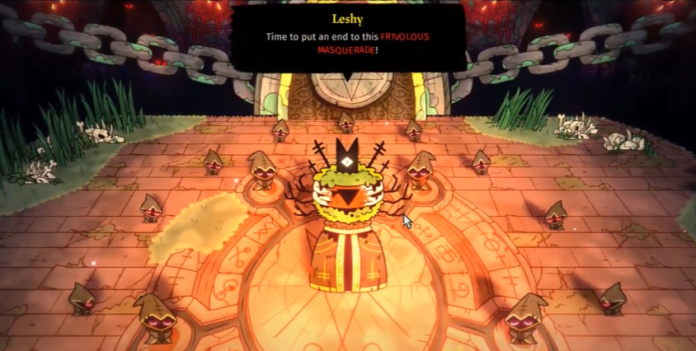 Cult of the Lamb is an intriguing cross between a farm sim and a roguelike, where you’ll embark on Crusades to battle opposing people in order to raise your flock and earn power. The ultimate aim is to overcome the four Bishops who are imprisoning The One Who Waits. Here’s all you need to know about defeating Cult of the Lamb Leshy Boss Guide, including his attacks.

Leshy is the Darkwood’s Bishop of the Old Faith. He is the first of the bosses we encounter, has a large following, and attempts to prevent you from helping free the One Who Waits. He clearly shows some demonic characteristics, which are most noticeable when you confront him.

Can’t there be any main boss without minions to “help” them? Anyway, Leshy sends little creeping minions to the arena on a regular basis. While these minions are dangerous, their role is more of a stage threat than an actual menace.

If you don’t deal with the minions fast, they can swiftly block large areas of the arena, making it impossible to avoid Leshy’s broad assaults. To avoid being overwhelmed, divide your focus between Leshy and the Minions, and employ a regional curse if you have one.

Leshy throws a torrent of liquid droplets. They don’t cover the whole arena yet are spread far enough apart that you may find safe locations between their regions of effect. Find a safe spot and freeze for a minute, or move in on Leshy and deliver damage as the attack rains down.

This attack may remind you of the Pokemon attack, Dig. If you can imagine it, it’s exactly the same except it’s moving around underground. He crawls into the earth before resurfacing to bring jagged stone pillars to the surface.

Leshy jumps into the air, crashing back onto the battlefield with the target showing where he will land. With his massive body, it’s harder to move out of reach but if you are quick to react, you can start moving as soon as it appears. Keep moving to avoid the danger zone, which may be difficult if the arena is crowded with his minions.

How and when to attack?

The difficulty of Leshy depends on what type of play you can adapt. If you have fast instincts and patience, then he is easier than any other boss in this game. You’ll need to know what assaults to expect from him in order to defeat him. The secret to defeating Leshy is basically timing your attacks.

Leshy’s attacks are sluggish and predictable, so keep your distance when the monster begins to glow or rear back, indicating that they are going to strike. Even though there are a lot of missiles flying around, the poison strikes are also relatively easy to escape. Simply go to a location where the earth isn’t glowing, and you won’t get hit.

If you are attacking Leshy up close, you will easily escape the liquid throw. For an underground attack, you need to stay away for a while and use that time to kill minions. Leshy is vulnerable during summoning for a good amount of time so use this time to harm him as much as possible.

That’s all for Cult of the Lamb Leshy Boss Guide and hopefully, it’ll help you in defeating him. With this much slashing, let’s get to something light-hearted. For that, here is Cult of the Lamb Hearts Guide(Healing). More guides are available on our site so do check them out.

Best Rogue-like Games to Play in 2022

Cult of the Lamb Recipes Guide