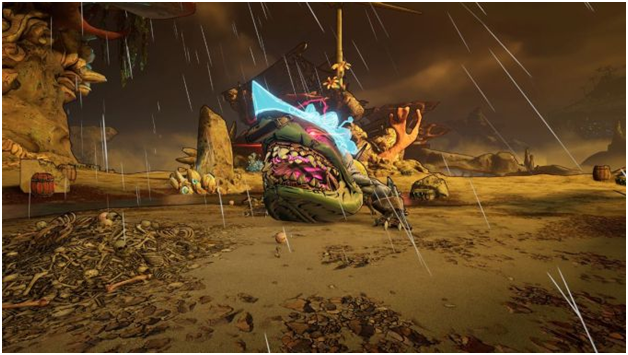 Chums, the boss of Coiled Captors DLC is an unyielding beast to go against, that is if you can get to him first. If you are able to beat his first form, you will be met by his second form. Here are a few points that can help you take down Chums in Tiny Tina’s Wonderlands.

Tiny Tina’s Wonderlands is a game of numerous options. With all of the choices available, you can even make your FateMaker stand apart. You can also customize your race, look, voice, and personality.

Looking out for other sea creatures

Chums, though appears to be a creature strategically equipped, does not have many attacks. He will roam about the area leaving the pirates and other sea creatures to attack you.

So make sure you tackle the sea creatures before going after Chums or you will be knocked down in no time.

You will come across tornadoes swirling in the arena, make sure to look out for these. If you hit one, it can throw you off. However, you can destroy these tornadoes by shooting if you find yourself in one.

As Chums moves about the arena, he will occasionally try to attack you with a biting attack. Keep your distance to avoid these attacks as they can send you flying backward and hurt.

Chums can also unleash an electric AoE on you, however, these might be relatively small and nothing to fret too much about.

The last attack up his sleeve is the tidal attack, you might want to stay conscious about this one as it can strike you even from a distance. Luckily, this attack does not prove to be very damaging.

It is favorable to use fire elemental weapons to beat chums as this version of Chums is relatively smaller and resistant to shock. It might take you longer to defeat him if you are running a shock build.

Chums, though looks ferocious, is not a very difficult boss. The key strategy is to keep moving and stay at a fair distance from him.

After you have successfully defeated Chums, look around for any loot you can get. Then take the portal back to Dreamveil Overlook. The rooms that you have passed through, as well as Chums himself, will be added to the Chaos Chamber pool of rooms and bosses.

We hope this brief guide was helpful and paves way for you to beat Chums, the Old God in Tiny Tina’s wonderlands. For information on lucky dice and lost marble locations throughout the game, make sure to follow Retrology.

Top March 2022 games that you should definitely play