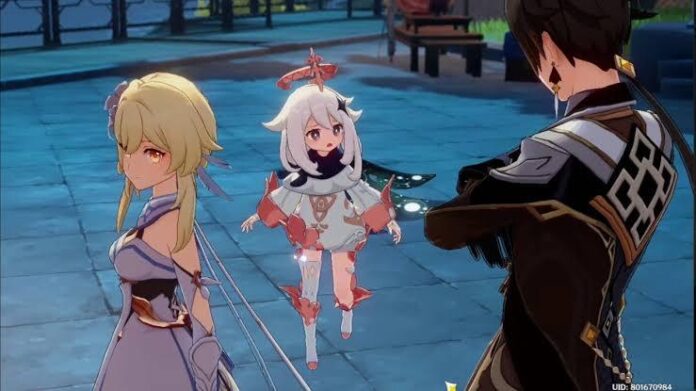 Genshin Impact Update 3.1 brings you a new exciting World Quest to embark on. Afratu’s Dilemma gives you an opportunity to explore the wide stretches of the new desert region in the west of Sumeru. It is actually a continuation of the Archon Quest, bringing you new characters to unlock and items to collect on your way.

Afratu is actually a member of the Akademiya and has given you the task to explore the depths of a huge Ruin Golem machine, one of only three that survived a great war. The machine has recently been brought back to life, wreaking havoc and targeting any living thing that has been crossing its path.

In this guide, we will help you find your way through Genshin Impact Afratu’s Dilemma World Quest:

To unlock the Afratu’s Dilemma World Quest, you will have to travel to the Valley of Dahri. You can get there via a nearby Statue of the Seven atop a plateau to the west or teleport yourself to a Waypoint towards the north where you will find Afratu standing near a pool of water in the valley.

Talking to Afratu will unlock the quest for you.

Your first task at hand will be to enter the Robot. However, you can’t just run all the way up to the Ruin Guard to gain an entrance as it might kill you. What you need to do is watch out for loose rocks using Elemental Sight which will paint these rocks in a distinct white glow.

Now use these glowing rocks to bait the Ruin Golem into destroying them. Make your way to a huge rock and stand there until the Golem has charged the laser and roll out of there before the attack hits you. This will destroy the rock and uncover the entrance for you.

Go into the Tunnel

Now that your path is clear, head through the tunnel and explore the area that lies ahead. You will immediately stumble upon a green orb wrapped in tree branches against the back wall. This is called a Suda’s Flow seal. You will be running into a few of these during the quest. Attack this seal to break it.

Through the Tunnel into the Robot’s Arm

You will come across a few more seals and some enemies as you walk further into a tunnel. Keep making your way upwards into the cave till you hit upon a  hidden underground Teleport Waypoint. Stay on your path and this will lead you into the robot’s arm.

Head to the Cockpit

As you make your way further, you will find yourself in the cockpit. Follow the Seelie at the centre of the chamber to the second level where you will be given a task to ‘Break Suda’s Flow at three locations’.

This might be a tricky puzzle because you will be made to look through multiple floors and you can only make your way to the next Suda’s Flow if you have broken the previous one.

However, we already have an easy to follow guide to all three Suda’s Flow locations to save you time and effort.

Now that you have broken seals for all three Suda’s Flow sites, take the wind-lift back up to the main room. Head into the cockpit and interact with the controls to deactivate the Ruin Golem.

Now that you have successfully deactivated the Ruin Golem, head back to Afratu to inform him of your success. You can either fast travel back to the Teleport Waypoint or Statue of the Seven nearby Afratu’s camp. This marks the completion of the quest.

By completing the quest, you can gain:

Achievement: Reclining on Top of the World

This was all about Genshin Impact Aftatu’s Dilemma world quest. For more guides and updates, stay tuned with Retrology.