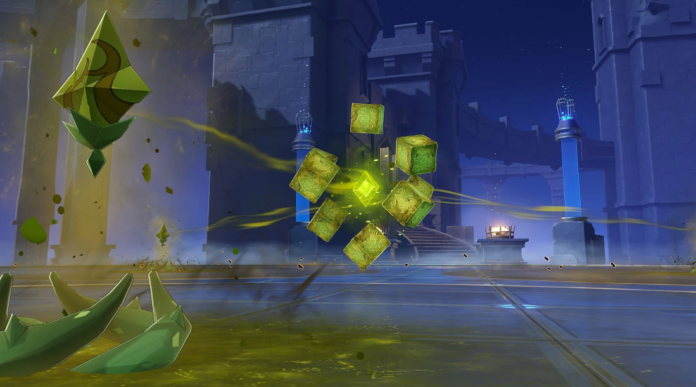 Travelers will face two new bosses in Genshin Impact 3.2. The first foe is Dendro Hypostasis, a Normal Boss challenge found in Sumeru’s Land of Lower Setekh. This opponent was introduced in an introduction to 3.2 Livestream and is now available to challenge. This guide will help you find Genshin Impact new boss, Dendro Hypostasis Location, and also tips on how to defeat it.

“The leaf-green cubes that have emerged in the forest depths belong to a Dendro Hypostasis — overgrowth embodied. Use the power of greenery yourself to nourish the withered life here and heal this patch of land, and you shall obtain the bounty of the earth.”

Dendro Hypostasis is located on the southwest side of Dar-al-Shifa, near the teleport waypoint. Go to the nearest teleport point (waypoint) and go straight ahead till you reach the edge. Then fly down and look into the cave leading into the area where you were standing before. If you see plants in the cave, this is the right location.

Go inside and reach the large square area. Proceed towards the middle and that will activate the Dendro Hypostasis.

How to defeat Dendro Hypostasis

Dendro Hypostasis is simple to defeat if you just have a playable Dendro character. Once you’ve defeated him, you must evade his assaults and attack him with your strongest squad when he’s defenseless. If you don’t have any Dendro characters, you won’t be able to destroy his core, which means the conflict will last indefinitely or until all of your characters die.

When defeated, it drops a new material called Quelled Creeper, which is exclusive to only this boss. It is required by Nahida, the game’s playable Dendro Archon. As a result, this foe has become the number one target for any player looking to level up Nahida.

We have a collection of Genshin Impact guides on our website, so do check those out if you want more assistance.