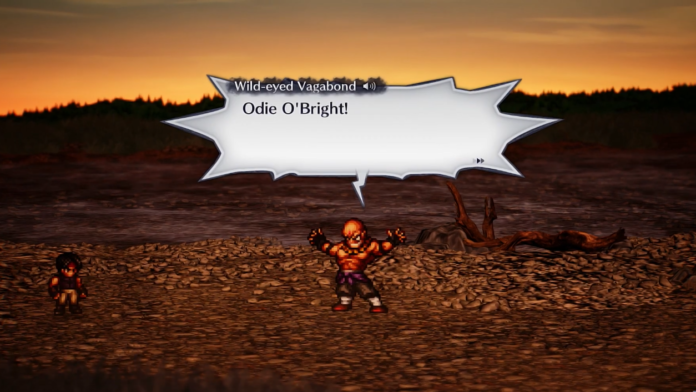 Live a Live is a role-playing video game from the 1990s developed and published by Square. Now, this game has finally received a remake which is available on even more platforms. The game is full of items to find and bosses to fight. One such boss is Odie O’Bright who we confront in the “Present Day” chapter. In this guide, we’ll cover how to beat Odie O’Bright.

Odie O’Bright is the final, largest, and strongest boss in the chapter “Present Day”. Additionally, he’s known for not sparing any opponent he fights. After you defeat the first 6 opponents in Present Day, you’ll see a small cutscene in front of a body of water where he will be introduced.

Odie will call the player weak for not killing their opponents. He’ll also name all the opponents we previously faced, calling us fools for spearing them, and telling us that he has already killed all of them.

Odie has three main attacks you will have to look out for, Reaper’s Scythe, Bonebreaker, and his most powerful attack: Diving DDO.

Reaper’s Scythe: This is his main attack. It hurts the player if they’re only one tile away.

Bonebreaker: This is his secondary attack. It deals damage to the player if they are two tiles away. However, on the bright side, it deals only a small amount of damage.

Diving DDO: This is the strongest attack that he unleashes once his wait meter is full. It deals a great amount of damage if it hits you. It’s recommended to move three tiles away from where you were once he initiates it.

Since most of his attacks are close-range, it’ll be best to stay a distance away from him. Once he starts charging up for Diving DDO, run three tiles away from where you were standing cause that’s where he’ll be landing.

As for attacks, Celestial Palm should be used to make them weaker, followed by Fleetfoot or a German Suplex to stun him. Besides that, you can also opt for ranged attacks like Tornado Press, Spiral Knee, and Worlbreaker’s Wrath to defeat Odie.

These are all the tips we have on how to beat Odie O’Bright. It will be an overall easy fight, just keep focusing the same attacks on him and maintain a distance between him and yourself. Moreover, once you’re done with this fight you may want to learn how to fight O.Dio Boss in Live a Live. Alternatively, you can also find out where to find Beru after she runs away or where to find the Storehouse key in Twilight of Edo Japan. For more Live a Live guides, stay tuned to Retrology.

How to beat O.Dio Boss in Live A Live

How to find Beru in Live A Live

How to get The Storehouse Key in Twilight of Edo Japan...

Live A Live Remake Is Out And Is Getting Great Reviews!

Live A Live Disciples Guide (Who to pick?)