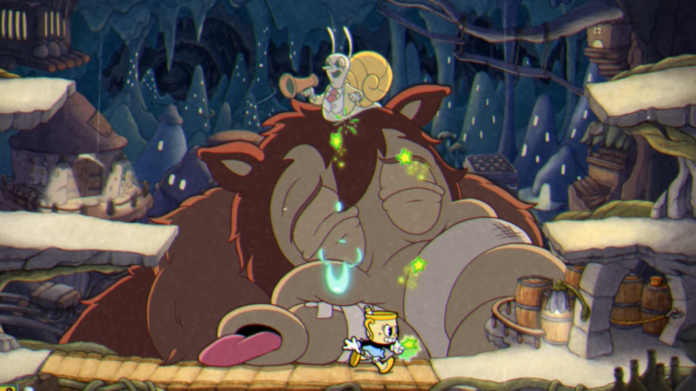 Cuphead: Delicious last meal is a sequel to the original Cuphead game. It is a 2D game with the animation style of a 1930s cartoon which is why it packs a nostalgic punch for ’90s kids. This is a new storyline with the addition of a new character, Mrs. Chalice. Today we are going to talk about how to beat the new boss, Moonshine Mob Boss.

Moonshine Mob is one of the first boss battles in Cuphead’s Delicious Last Course DLC. As usual, this boss has multiphase combat, with each part altering the character you’re battling. While it appears simple at first, there are certain twists and turns that may easily trip you up as the fight progresses.

You have to beat Moonshine Mob Boss in four phases as four different bosses. Here is the information in detail on how you can tackle his attacks and beat him.

The first phase has a spider and it is very much just waiting for the boss to give an opening for you to shoot or just doge the different shenanigans thrown at you to save yourself. The good thing is that the boss doesn’t really have a defense mechanism so you can hit him whenever he is busy calling or preparing for attacks. Stay on the upper floors as you can dodge from there but not from the lowest floor as that’s where the boss mostly is.

The bouncing caterpillar is the most harmful since it requires more attacks to eliminate. It can easily attack you due to its large screen coverage. However, as long as you remove explosives on the bottom and middle floors, you should have plenty of freedom to maneuver.
Always prioritize killing opponents above the boss, as this is the only true chance for it to harm you.

The second phase with the singing bug is short and easy to go through. The only real threat which cannot be avoided is the sound waves. They start off green, then turn yellow. After yellow, be quick to react as it is a warning sign that the waves are going to turn red now. Wait for red waves and then move about avoiding that. Make sure to roll when the beams are approaching; towards the recorder. The only thing you have to hit is the bug in the middle and it is easy to hit her as she barely moves away from the middle.

This phase is comparatively easier as now there is a giant anteater in the frame as the third boss. You have to avoid it and that’s also easy. Just go over the attacks and hit him from the opposite side of where his trunk is. It’s easy as this leaves the entire middle space open and you can hit him as easily as ever. Make sure to use long-range attacks for this so you can change sides easily.

After phase 3 you will get a false knockout alarm so beware of that and be ready to continue. This is the last stage and the snail, on top of the anteater’s head, is your opponent now. You can easily finish him off with your special attack if you were saving it till now. Now, just dodge its gunshots and attack him continuously. You can easily avoid the shots and the fight will soon be over.

Finally, you’ll be able to beat the Moonshine Mob boss. This was a four-phased boss which can be seemingly menacing but it’s easy if you know how to avoid attacks.

For more guides on how to defeat different bosses, head on to our guides section on the site Retrology.