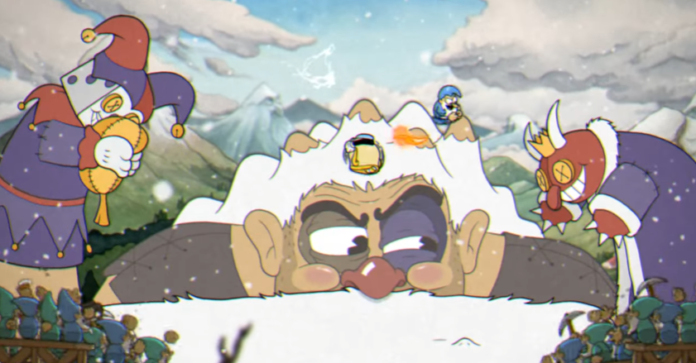 Cuphead is a 2D sidescrolling run-and-gun video game created by siblings Chad and Jared Moldenhauer as Studio MDHR. It got really famous on its first installment so they decided to make a sequel. Cuphead DLC is the second part of the story and in this story, we encounter Glumstone as the giant boss.

Glumstone the giant boss is one of the new additions of bosses to the Cuphead franchise, coming in the DLC version. This boss may be found on the island’s northeastern edge, near the climbing competitors.

Now, let’s got to know how can we beat Glumstone the giant boss.

It is not as easy to beat Glumstone the Giant Boss compared to other bosses. He is quick to change attacks and the change in his phases brings more problems.

Phase one is just filled with so much happening that you barely get the chance to attack. The best time to attack is by staying on the top pillars. You will only need to go down from there when the geese fly by. Keep jumping around and you will get through this tedious phase. Hold down the fire button even if you’re not shooting at Glumstone to keep these nasty monsters off your screen.

The second phase is much easier with a little more room to run around and dodge the attacks. To speed up the process, use the special on either of the socks. Believe me, it saves a lot of time. Also, keep track of the ball used by puppets. Count to 4 each time to keep track of when you can attack the most and when to dodge.

The gnomes this time are not really on the ground much so you don’t have to worry about them.

This is the last stage and you are swallowed by the giant. There, inside him, you see five skeletal platforms which are your only space to move. The thing you have to hit is a ball of muscle at the top which moves a lot. This is the hardest part as these platforms are not always five and can get down to only two at one time.

The drumsticks are food for them and when they get one, they dive into the acid, giving you fewer platforms to move through. The main thing you have to focus on is moving so the best way to get through is to use high-power attacks. Use special attacks as much as you can (also prep yourself beforehand for this).

This is a pretty hard stage so good luck in fighting them.

That’s it on how to beat Glumstone giant boss. He sure is a hard one and we hope this guide may have helped you. We have also covered how to fight the Moonshine Mob Boss.

For more guides, do check out our guides section for more boss fights and detailed information.