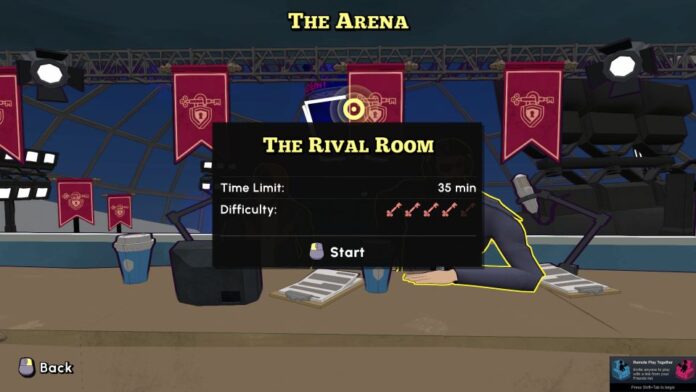 One of the more challenging problems in Escape Academy is the Rival Room. The goal is to beat Gillian in a one-on-one encounter by finishing puzzles before the clock runs out. Here is a guide for Escape Academy The Rival Room Solution.

We have also covered a guide for Escape Academy Tea ‘N Tea Puzzle Solution so do check it out if you need help. Now lets get into the guide.

Contents
1) Escape Academy The Rival Room Solution
1.1) How to fire the ballista
1.2) How to solve the statue puzzle
1.3) How to weigh
1.4) Enter combo using under 10 rotations
1.5) Final puzzle area

How to fire the ballista

It is necessary to properly connect the cogs before you fire the ballista. In the area where you are, there are three different sizes of cogs.

Turn the cogs to fire the ballista after positioning them as shown in the image.

How to solve the statue puzzle

Then a board with words will appear. The words stand in for the names on the statues.

You need three statues: Max, Wyatt, and Timmy. They were picked since their names are spelled the same from both Gillian’s side and the front.

If viewed from the other side, the letters won’t appear to be upside down.

Then, five different colored weights will be provided to you, each with a different weight.

You can use the weighing scale to measure them.

Put in the values for each weight as shown below.

The next step is to distribute the five weights among the three bars.

You’ll notice that each table is located on a specific symbol in the following room. You select that particular symbol by pressing the button on the table.

The goal is to push the buttons for the symbols (circle, spade, club, triangle, square, diamond, and heart) that are displayed on the board. You can only rotate the location a maximum of ten times.

Push the circle, spade, and club on the tables in that order.

Next, press the blue button twice on the right.

Return to the rotator, press the blue button once on the left.

Now you can press the square’s button.

Then proceed and press the diamond button.

Last but not least, press the orange button once on the right.

Now you can press the heart icon.

The last step requires you to use bronze, silver, and gold medals to unlock the safe.

This section is broken up into numerous tiny problems.

The frame with the word START is the first one. Basically, you must reverse the tiles as seen in the figure below. The entire puzzle area resembles the little frame when viewed as a whole. Each puzzle is mounted in a frame that is either light brown or black in colour. According to the colour on each puzzle frame, flip the tiles on the START frame.

On the lock, use the cabinet key.

Then, a hint will appear: “RING THE BELLS, MY DEAR FRIEND.” GEAED will be underlined.

In the GEAED order, ring the bells.

You’ll be awarded a bronze medal. “YOU’LL ESCAPE WHEN PIGS FLY” is the following hints.

Settle for the revolving puzzle with a pig.

Basically, you have to decide on the pig head and pig tail. Wings must be attached to the central body.

You’ll find some directional arrows inside.

Push the UP, RIGHT, UP, LEFT, DOWN arrow buttons while following the same instructions.

Following that, you will receive 1 cent, 5 cent, and 10 cent coins.

Put one cent, five cents, and ten cents in the top row of the coin puzzle.

Place one cent, ten cents, and one cent in the bottom row.

You’ll find playing cards inside. Do not forget the card values.

Find the clock with the values that correspond to the cards you discovered.

Place the clock hands in a symbol-based pattern. King of hearts, seven spades, a diamond queen, and three clubs.

You can follow the example below, however the spades must be on position 7.

The word “BANE” will then appear.

To solve the following puzzle, enter the code BANE. Marbles will be inside.

You have to push the yellow or orange buttons in the marbles section to make the marbles fall to the appropriate hue.

Push yellow twice, orange once, yellow once, and orange twice.

The medals should then be arranged in order of colour.