Gotham Knights – How to unlock all suits 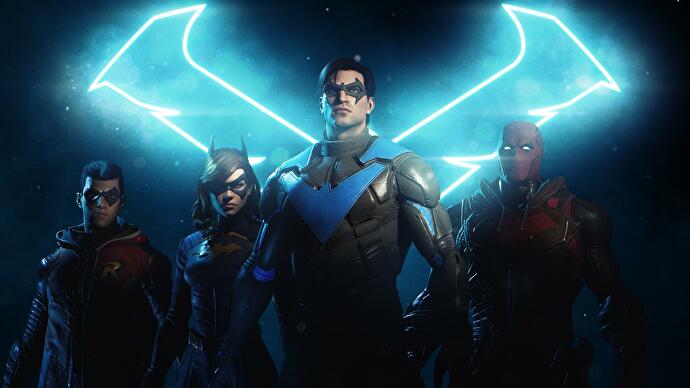 One of the more prominent features of Gotham Knights is the variety of distinct outfits and color variants available for each of its four characters. The majority of these are unlocked simply by playing the game, however, the prerequisites differ.
This guide will explain how to unlock all 14 suits in Gotham Knights.

Before we go into the details for each, let’s go through how the entire process works. Suits are unlocked in Gotham Knights in one of two ways: you either receive a blueprint (gear component) that you can create, or you receive the suit transmog as a reward for completing story/side objectives.

Even if the stats of the suit you’re considering are below your level, building it for the Style alone is absolutely worth it. You can then use the Style as a transmog option later on. If you haven’t seen a new drop in a while, check your Crafting menu; you might already have what you need but haven’t crafted it.

The deluxe edition suits are the exception(s), which can only be obtained by paying extra for that version of the game or later purchasing the Visionary Pack DLC.

To unlock a suit complete a story/side quest or one of the many open-world activities (such as Batman’s hidden caches). They can also be random drops from playing the game.

A blue holographic square will appear when a suit blueprint is released. When picked up, you’ll be able to build it afterward. The good news is that, with the exception of the Titan suit, all heroes can unlock suits.

After starting the game, the New Guard suit Style is unlocked by default. This is the default appearance of all four heroes.

Purchasing the game’s deluxe version enables transmogs for the Knightwatch uniforms. They’re also included in the Visionary Pack, which costs $25.

The Beyond suit Style is also unlocked early in the same pack/deluxe edition, but you can find it simply by playing the game. The Beyond transmog, on the other hand, is a reward for completing the first portions of Lucius Fox’s mission.

All four of these costumes can be obtained as random loot from defeated opponents. The transmog variants are dependent on finishing each phase of Lucius Fox’s crafting challenge.

Each phase is named after the suit, so once completed, you’ll unlock the transmog and complete that section of the challenge.

The Talon suit is the most difficult to unlock because it is hidden in a side quest. You’ll receive calls from Alfred alerting you of “an odd energy signature” nearby while you explore Gotham. This occurs only after completing the Powers Club quest.

Examine your surroundings, when you receive the call. You’re looking for a mural in green that’s been sculpted onto a neighboring wall. The game does not tell you where it is, but if you find it and scan it, you will earn a large stash of crafting material.

There are five of these scattered throughout Gotham. You’ll acquire the Talon transmog when you’ve inspected all five.

The Demon and Shinobi suits are very difficult to obtain. The gear components themselves do not appear until late in the game.

Another crafting challenge is required to unlock the transmog. As a general rule, the gear you’re after will be added to the loot pool after the associated crafting task appears in your queue.

Those two suits also appear pretty late in the game.

To craft and customize the Year One suit, gear components can be found as random drops. However, collecting all 60 Batarangs is the only way to get the Year One transmog.

We have a handy list of all Batarang locations that you should absolutely bookmark before embarking on your adventure.

The Knight Ops can also be obtained as a gear drop from random encounters. Unlocking the transmog is, as you might expect, linked to a mission.

To unlock the transmog you need to locate and unlock all of Batman’s secret caches.

Titan is the only suit that each hero must unlock for their own. To obtain it for your character, you must complete their personal Knighthood quest. This must be done for each of the four heroes, which also grants your selected knight the ability to glide.

The Knighthood transmog is your reward for completing Gotham Knights’ main storyline. You will receive one for each hero, regardless of who you were playing when you completed the game.

If you are stuck on a mission and need help finding Secret Cache Locations, Street Art Locations, or how to unlock the Knighthood ability, you can refer to their respective guides.

Mofeeza Masood
A gaming enthusiast, binge-watcher, and writer aimed to help the gaming community with my gaming guides. I also like to give recommendations of top movies/TV shows that people should watch.
Subscribe
Login
0 Comments
Inline Feedbacks
View all comments